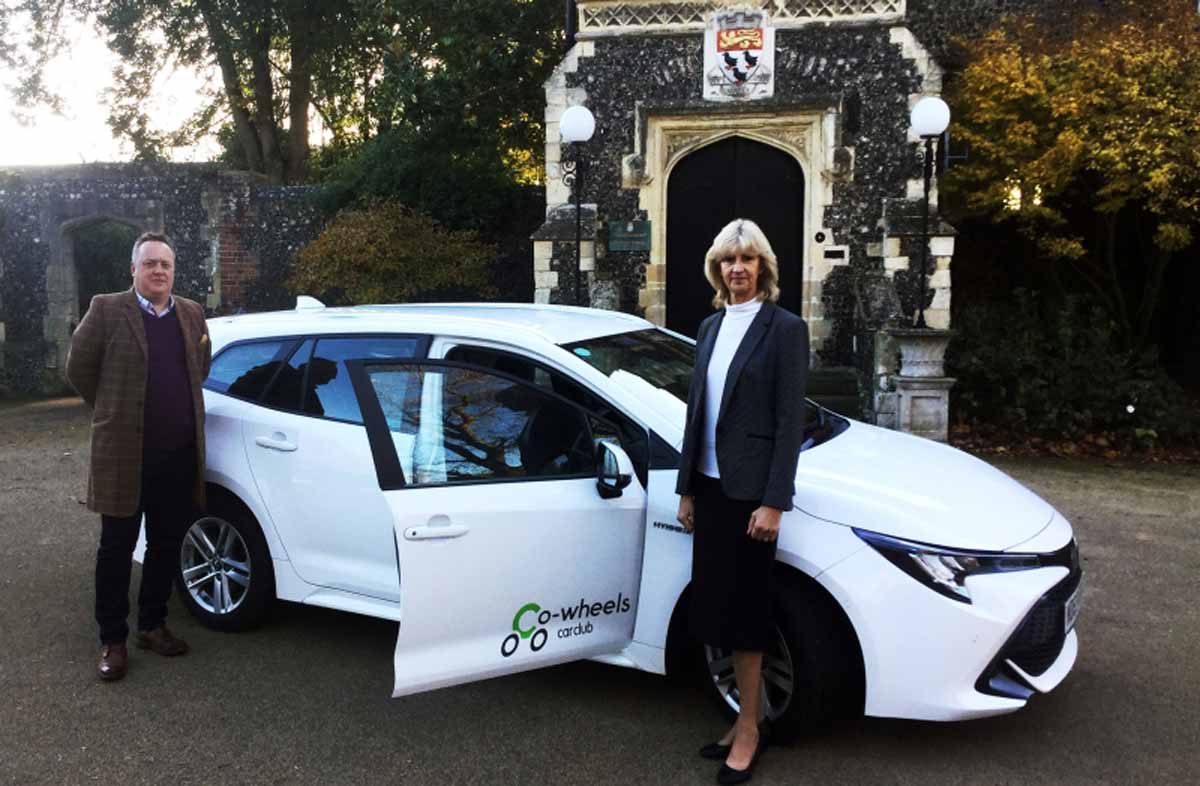 Co-wheels’ Andy Rutter and Cllr Jeanette Stockley with one of the hire vehicles pictured above Photo: Canterbury City Council

A fleet of five new hybrid cars, three Toyota Yaris and two Toyota Corolla, are now available across the city centre for pay-as-you-go hire for as little as 30 minutes up to full days.

Each car has its own designated zone and fixed parking bays where they can be collected from and then returned to once the hire ends, which are located in Castle Row, Station Road West, Holman’s Meadow, Longport and Military Road car parks.

Richard Falconer, managing director of Co-wheels, said: “We are pleased to support the positive steps being taken in Canterbury to reduce carbon emissions in the city with the launch of this new car club. This is our second all-hybrid club as part of our vision to be the greenest car club in the UK.

“This year has been an eye-opener for a lot of car owners, bringing to life how much time their car has spent parked and the financial burden for those who have had to make cutbacks. On the whole as a society we are also more aware of the damage petrol and diesel cars are doing to the environment, and our own personal contribution.

Canterbury City Council’s lead councillor for transport, Cllr Jeanette Stockley, said: “We’re really pleased that the Canterbury Car Club is hitting the road. A scheme of this kind is included in our air quality action plan because it has great potential to reduce emissions, so we hope it will be very successful.

“Not only are the vehicles all-hybrid, the scheme also encourages people to only use a car when they need to, rather than using one because it is conveniently sitting outside the house.

“Ditching your own car for a hire vehicle may seem like a big step, but for many people it will only take a few small changes in how they live their life for it to become a viable option. We’d encourage residents to check it out and see how it can work for them.”

Car clubs have been shown to reduce car dependence with, on average, each car club car removing between 10 and 15 privately owned cars from the road. Car club members also walk, cycle and use public transport more after joining a club.

To protect vehicle users, Co-wheels is carrying out extra measures to ensure the highest level of cleanliness. Every vehicle is professionally cleaned regularly and all touch surfaces are cleaned with a revolutionary new long-lasting disinfectant.

For more information on the new Canterbury car club and to become a Co-wheels member, visit the website.