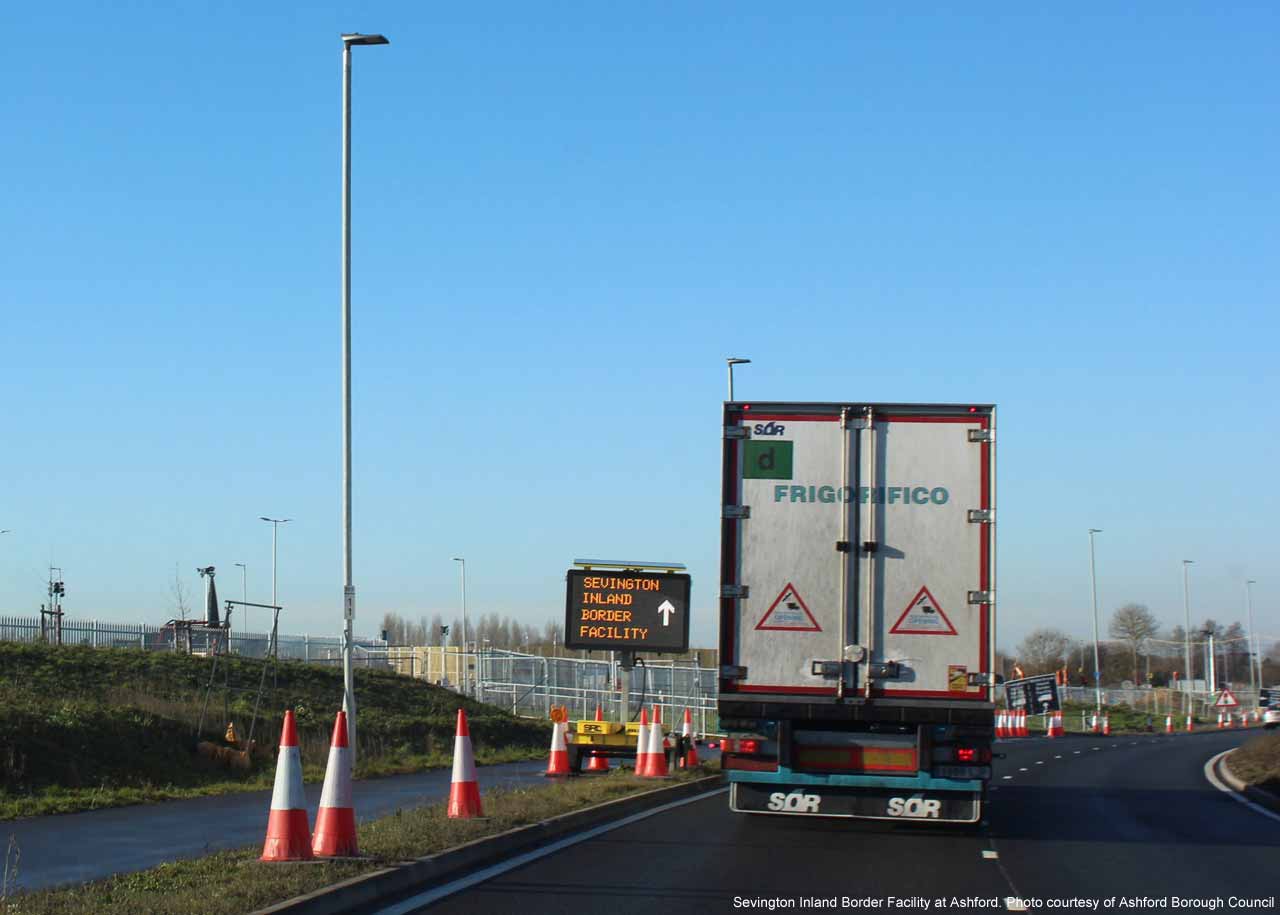 Around 130 jobs are set to be created as Ashford prepares to run the Border Control Post at Sevington; part of £14m Defra support for local councils.

Ashford Borough Council is recruiting around 130 staff as it prepares to provide a port health service at the Sevington Inland Border Facility (IBF). The site will provide the customs and transit checks required for hauliers following Brexit.

Covering 93 hectares, Sevington is one of the biggest such facilities in the UK, with the council set to play a vital role in making a success of the country’s new trading arrangements with the EU. The Kent site has been open and operating as a HGV holding facility since January

The Department for Environment, Food and Rural Affairs (Defra) has given £14m to local authorities across England to help them maintain the UK’s high standards on imported animal products. Across the country, more than 500 new port health roles are being created to facilitate the new checks on imports of animal products from the EU from April 2021, with £8.8m invested in Ashford Borough Council and Dover District Council.

When Defra announced it was designating the Sevington site as a Border Control Post, the council became responsible for carrying out various port health controls. This is in conjunction with other agencies such as the Animal and Plant Health Agency.

The council service will be introduced in a phased approach, with documentary checks starting on the 1 April and physical checks three months later. These are different to customs checks, which are starting in February as planned.

As a result of Brexit, the council will undertake checks on imports of products of animal origin (POAO), high-risk food not of animal origin (HRFNAO) and animal by-products (animal products not for human consumption) imported from the EU.

The site has been developed by the Department for Transport and is the responsibility of Defra and Her Majesty’s Revenue and Customs (HMRC). It is managed by contractor Wincanton.

Around 130 staff are likely to be directly employed/engaged by Ashford Borough Council, with local people recruited where possible. The recruitment drive has already begun, with a range of posts on offer including roles in IT, legal, administration and HR as well as managerial and technical and environmental positions. A new facility is being constructed on site.

Running the Border Control Post is a big undertaking and the council has been successful in securing financial and practical support from government in setting it up. We have also taken advice from port health authorities across the UK. The creation of new inland border facilities after Brexit is of national importance and the site at Sevington is a key part of the national plan.

Cllr Peter Feacey, the council’s Portfolio Holder for Community Safety and Wellbeing, said: “The new service is an exciting challenge for us. While the scale of the task is testing, we are fully committed to implementing the changes that are necessary and meeting our responsibilities.

“I am heartened by the support being provided by Defra, not only from a financial perspective but also practically in terms of designing and implementing this service in just a few months. I am sure that we will rise to the challenge before us and provide this nationally strategic service.”

Farming, Fisheries and Food Minister Victoria Prentis said: “We are rightly proud of our high standards of animal and plant goods, and we are determined to maintain them, while ensuring that operations at our ports continue to run smoothly.

“This funding will allow local authorities to play their part in maintaining standards and efficiency at our borders, while also providing investment in new jobs and infrastructure.”

Toby Howe, Senior Highways Manager at Kent County Council, said: “Getting Sevington operational in time to play its part in traffic management plans for the UK’s departure from the EU was a huge undertaking. But the hard work hasn’t stopped there and now the focus is on transforming the facility into a fully-fledged Inland Border Facility to help trade flow without disrupting traffic.

“It’s fantastic to see the site plans moving forward and the job opportunities created for the local community in the process. Just as we did in preparation for the end of the Brexit transition period, the Kent Resilience Forum, including Kent Police, KCC and Highways England, will work closely with Ashford Borough Council to deliver this challenging, but exciting, project. It puts the town at the very heart of operations for the UK’s new trading arrangements with the EU.”

An officer steering group under the leadership of Ashford’s Council’s Chief Executive is driving the project forward and a major recruitment campaign is underway. Back-fill within services is also happening in order to create the necessary capacity to delivery this project. Where necessary this will involve the recruitment of temporary staff.

Work is now going on to design the service in detail. This includes staff recruitment, purchasing the required IT systems and integrating them with council back office systems, designing the checking processes, and beginning the various training programmes.