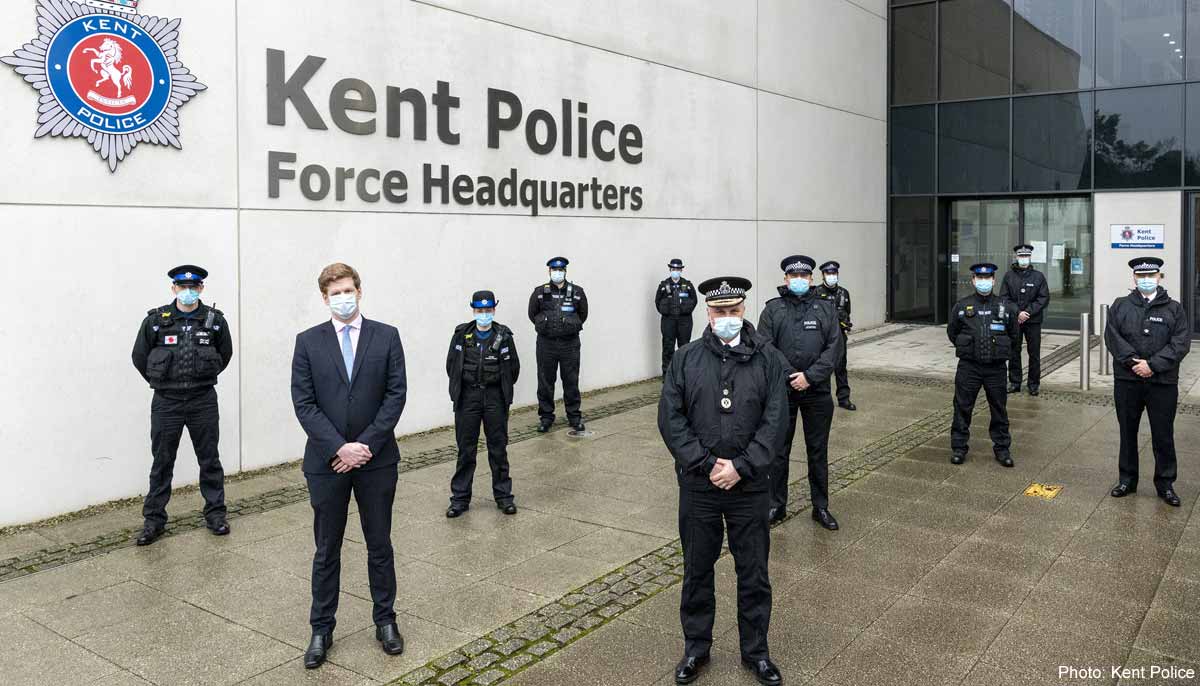 Communities across the county are benefiting from a new dedicated team of Kent Police Community Support Officers in the aptly-named Problem Solving Task Force.

The countywide team is made of highly motivated experts who are specially trained to resolve long-term problems and will work with partners to prevent crime, disrupt offenders and put a stop to the most harmful anti-social behaviour.

It was officially launched by the Chief Constable of Kent, Alan Pughsley, on Wednesday 3 February 2021. Funding for the new resource was made available following a successful bid by the Kent Police and Crime commissioner to increase the council tax precept last year.

Chief Constable Pughsley said: ‘My officers already do a fantastic job protecting the county, with every district benefitting from several outstanding policing teams. Each day the work of these teams helps remove offenders and safeguard vulnerable people. These efforts will not change but will be significantly complemented by this new task force.

‘We know all areas have localised concerns which they would like to have resolved and our new, specialist team is going to bring about meaningful change. Its expertise has already achieved considerable success, not least removing a county line in Ashford.

‘This is an exceptional start which demonstrates the effectiveness and long term benefits the team will have on the communities it serves. My officers working within it are going to continue to work with partner agencies, residents and businesses to identify issues of concern and bring them to an abrupt end.’

On top of providing increased visibility on the streets, targeting people who cause issues and building relationships with communities, the team will also have the capacity to support other operational priorities. These priorities include identifying children at risk of harm and offenders involved in organised, and violent, crime.

Although the task force is now fully operational, it first went live in the east of the county in October 2020. A month later, it launched in west Kent.

As a result of the team’s work, and the joined-up work with partners, numerous positive results have already been achieved. This includes:

• Assisting in warrant activity which led to the removal of a county line in Ashford.

• Issuing community protection warnings to numerous young people involved in antisocial behaviour in Ramsgate. Since these warnings were issued, these individuals have not been involved in further incidents.

• Arranging the removal of large amounts of graffiti from locations in Winterstoke Gardens and Victoria Parade, Ramsgate.

• Arranging the removal of fly tipped rubbish in Tankerton.

• Seizing alcohol from a gathering of young people in Sevenoaks.

The day to day running of the team will be overseen by Inspector Sarah Allen, who said: ‘Many of the jobs our team deal with are underreported, although the quality of life impact can be significant – with residents and businesses often feeling that an issue affecting them is not important enough to warrant our attention.

‘I would encourage them to change their mindset. We are here to help ensure your community remains a safe place you can enjoy all year around and you can help us achieve that by reporting any concerns you may have.

‘It is easier than ever to get hold of us – make a report online, either through our online reporting tool or live chat feature on our website, call us on 101 or approach one of our officers directly when you see them on the streets.’

Kent Police and Crime Commissioner Matthew Scott said: ‘Residents and businesses have told me that crime prevention and dealing with antisocial behaviour are among their top priorities.

‘I’m delighted to have been able to support the creation of the Problem Solving Task Force through the council tax precept.

‘The team is doing excellent work to support local communities and help improve quality of life.’