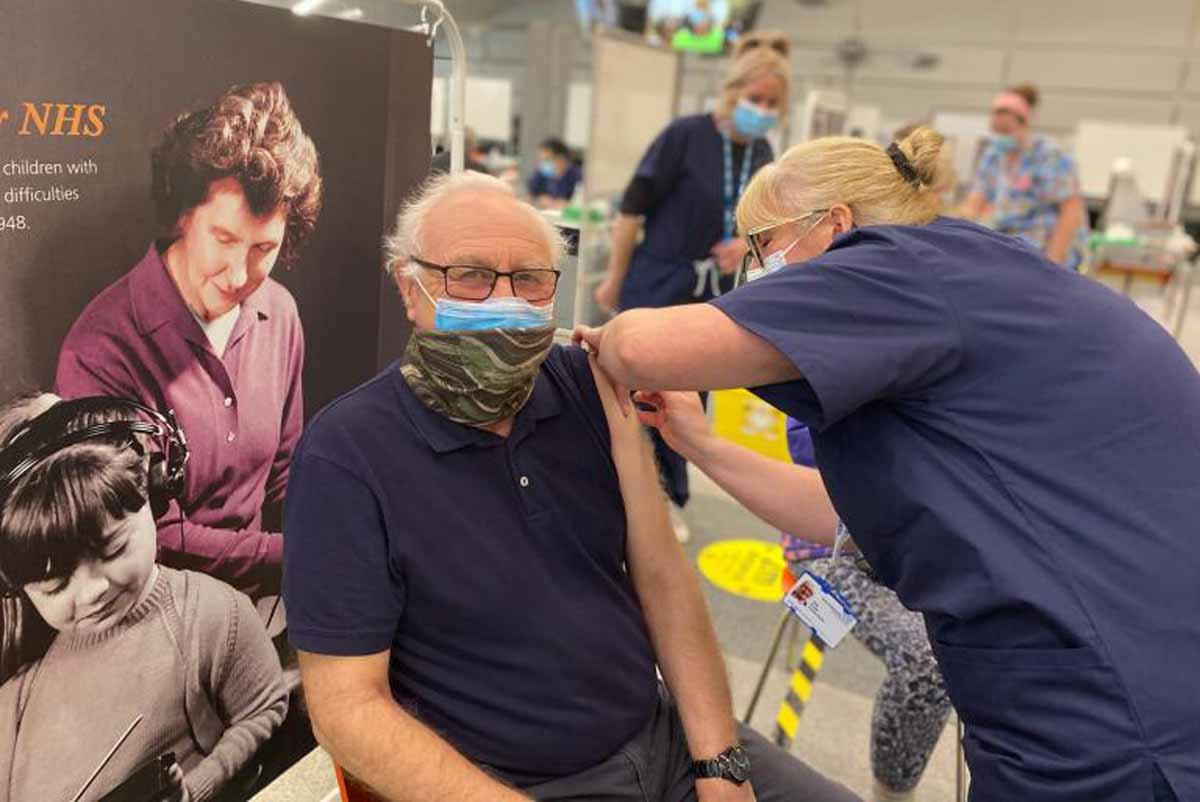 A grandad-of-six, who almost died of Covid, was one of the first people to receive his vaccination when Kent and Medway’s latest centre opened in Ramsgate today (Monday, 22 February).

Richard Denyer, 66, spent a month battling the disease just before Christmas and was given a 20 per cent chance of survival.

But today, he was given the life-saving jab in the county’s fourth vaccination centre with his wife of 46 years, Teresa, who has Alzhiemer’s, by his side.

He said: “This is a devastating disease and I wouldn’t wish it on my worst enemy, I would encourage everyone to have the vaccine. My wife and I ended up in hospital with Covid before Christmas and spent a month there. We had been so careful, but I think we caught it in a shop.

“Teresa became so ill three days later, she couldn’t get out of bed. I called 111 and she ended up in the Queen Elizabeth the Queen Mother Hospital on oxygen.

“I was in hospital with seven other people, I came out in a wheelchair, four others didn’t come out at all. I owe those hospital staff my life. They were wonderful and I can never repay them. I have been waiting for this vaccine ever since and I am so delighted to have it.”

Retired police officer Richard, from Herne Bay, who is still suffering from scarring on his lungs, said: “The thing I’m looking forward to the most is seeing my family and my grandchildren; we have a new five-month-old grandson Oliver, who we have never held.”

It was a sentiment repeated throughout the day, as vaccination centre staff worked tirelessly to protect eligible people in the former Saga call centre. The centre was closed in January when 600 employees started working permanently from home.

When it opened its doors again today, it was a life-saving vaccination centre for vulnerable people and those living within a 45-minute drive and local people were pleased to see it up and running.

Like Folkestone, Gravesend and Tonbridge, the Thanet centre is open to people aged 65 and over. Invitations to people in priority cohort five (over 65s) were sent last week.

Kent Community Health NHS Foundation Trust Chief Executive Paul Bentley said: “Every time I stand in one of our large-scale vaccination centres, I am in awe of what has been achieved in such a short space of time, not only in the way we have been able to transform spaces with the help of so many partners, but also the speed at which we are rolling out the vaccination programme itself.

“Thanet is the fourth one to join the family of large-scale centres in Kent and Medway and with Medway to come, we are confident we will have all areas of the county covered. If you are in the eligible priority groups, please do make your appointment to be vaccinated.’’

This week, letters will also be going out to local people, who are aged 64, inviting them to book.

Appointments are available at vaccination centres and community pharmacy hubs. People who book will have a pre-vaccination assessment before they receive their vaccine. Appointments are staggered to allow for social distancing and people are urged not to turn up early to avoid queues.

People, such as care home residents and others who are unable to travel to vaccination centres, hospitals or GP-led sites, are already being vaccinated at home. If people have already been given an appointment by their local GP-led service, they should attend that and not book another through the national service.

For a full list of other sites already up and running, visit www.kentandmedwayccg.nhs.uk/covid19vaccine