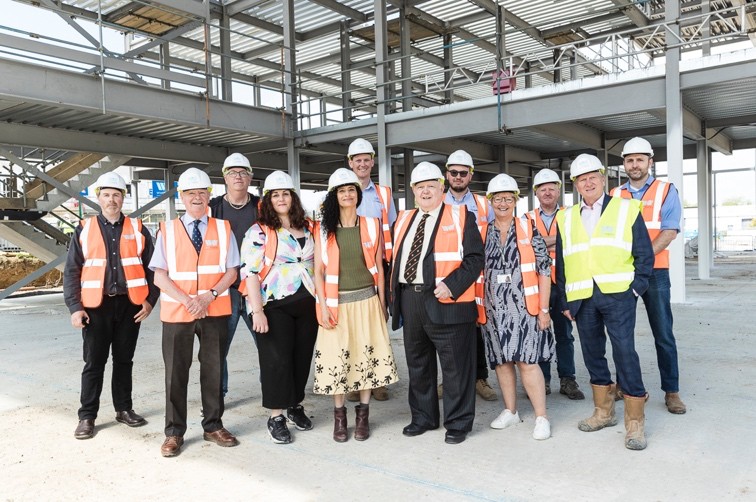 One of Kent’s largest cultural infrastructure projects has achieved a major milestone in the development process.

Jasmin Vardimon Company’s new and much anticipated creative hub takes shape, promising a state-of-the-art facility for the internationally renowned dance company to expand its activities locally, nationally and on the global stage.

This month saw councillors from Kent County Council and Ashford Borough Council joining representatives from Arts Council England, the construction partners WW Martin, Jasmin Vardimon and her team to mark the topping out of the new building in Javelin Way, Ashford.

Construction work on the 13,530sq ft site started in January and rapid progress has been made with the building’s structural skeleton now complete.

The building will include space for the creation of the company’s touring productions and rehearsals, dedicated studios to accommodate the rapid growth of the company’s acclaimed educational programmes and community classes, plus incubator space for small creative businesses.

The primary creation space will also be available to hire by external creative companies, offering 19m x 22m studio space with 8 metres grid height, fully sprung dance floor and full lighting, sound and AV rig. A new café and meeting rooms will also be available providing flexible spaces for the local community to get together. Any enquiries regarding external hire from Autumn 2022 can be directed to info@jasminvardimon.com.

In anticipation of the opening of the new premises in late Spring 2022, Jasmin Vardimon Company has set up two studios at the McArthurGlen Designer Outlet Ashford, enabled by Kent County Council. The rehearsal and office spaces, along with a temporary performance space at the Outlet, have resulted in a highly productive partnership between McArthurGlen and Jasmin Vardimon Company, providing the local community with a taster of what lies in store next year.

The light industrial units will also seek to support the growth of small and medium-sized enterprises in the post-pandemic world by providing opportunities for business development in the creative sector, as well as income from business rates.

The Jasmin Vardimon project is one of Ashford Borough Council’s ‘Big 8’ projects, which are significant projects which will benefit the borough in terms of economic development and inward investment. The other projects include: Ashford College, Designer Outlet expansion, Elwick Place, Commercial Quarter, J10a, Chilmington Green, Ashford International signaling. https://www.ashford.gov.uk/your-council/council-projects/the-big-8/