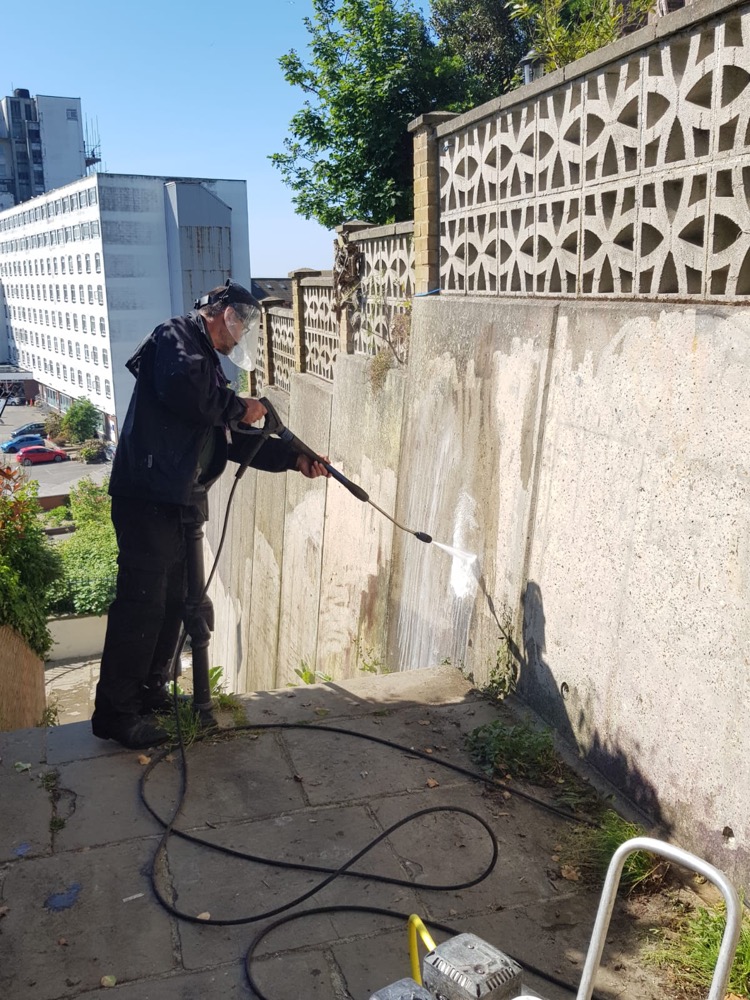 Removing graffiti near The Bayle in Folkestone

The war on graffiti is on the way to being won thanks to action by residents, Kent Police and Folkestone & Hythe District Council.

By working together, incidents are being spotted, reported, removed and, as in one case, taggers are being prosecuted.

A 31-year-old man from of Clifton Road, Folkestone, was jailed for a year by Canterbury Crown Court after he admitted 20 offences. He was captured on CCTV and identified after spraying graffiti on a fence in Cheriton Road. With the help of the public, he was linked to several other locations across Folkestone, in particular The Bayle area.

Members of The Bayle Residents’ Association (BRA) have been working with the council to remove graffiti – including Piper’s – from the area. The concrete wall on Parade Steps is pictured being cleaned by a council officer, using a jet wash.

F&HDC’s Cabinet Member for Enforcement, Regulatory Services, Waste and Building Control Cllr Stuart Peall welcomed the sentencing of Piper and praised the work of everyone involved in the prosecution: “Our environmental protection team worked tirelessly to identify, log, clear and respond to complaints about his graffiti and liaised with Kent Police to bring the offender to justice.”

PC Chloe West, of Folkestone’s Local Policing Team, said: “We work closely with local authorities – in this case, Folkestone & Hythe – to deal with graffiti, which is classed as criminal damage and is therefore a crime.

“We recognise the frustration and misery it causes in our communities and I hope the recent prison sentence handed to one such offender acts as a warning to anyone who thinks this is acceptable.

“I would encourage members of the public to report graffiti to us and to the local council so we can continue to take action against offenders.”

If your property is being damaged by graffiti, please contact F&HDC (https://bit.ly/3hia3PZ), or Kent Police.