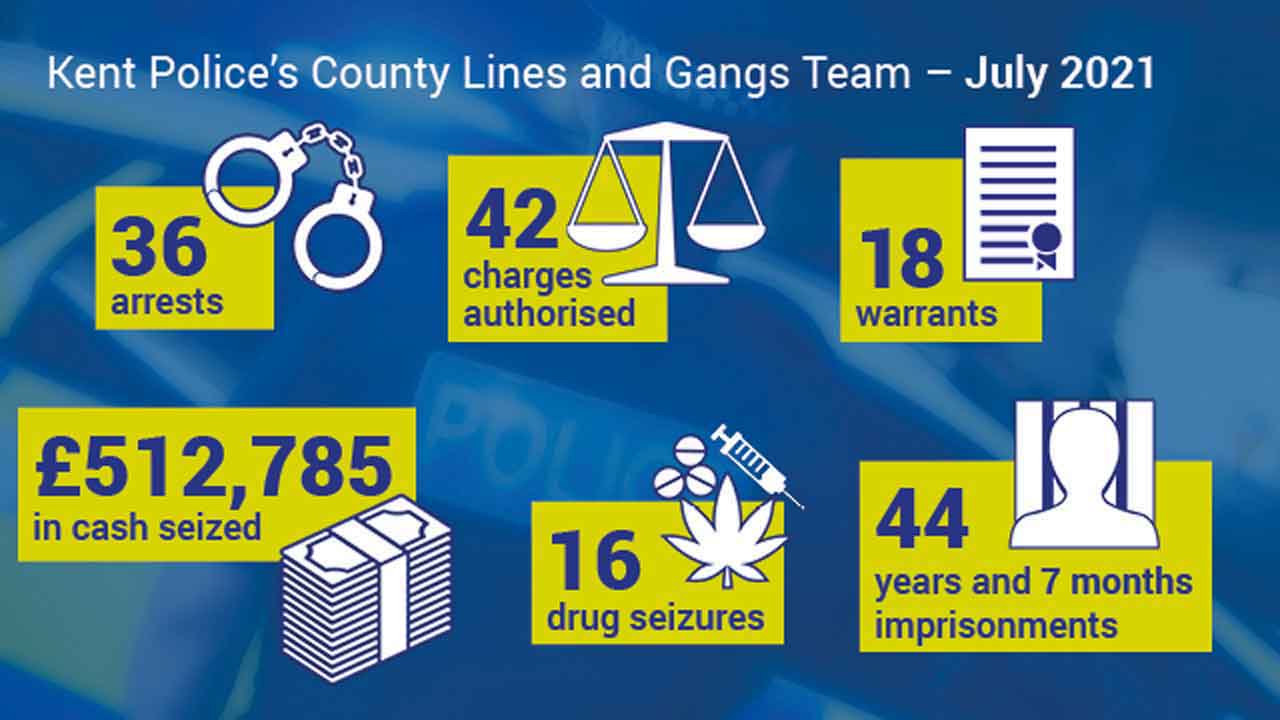 A substantial seizure of cash has been made by officers from the County Lines and Gangs Team who were conducting a warrant at a property in Hackney.

The warrant was one of nine that took place on Wednesday, 28 July 2021 and targeted a property thought to be used by county line drug dealers operating in north Kent.

Though no one was present the London address, officers did find a suitcase stuffed full of cash. It is yet to be officially counted, but it is estimated that the case could contain as much as half a million pounds.

The search was one of 18 conducted by the team in July, a month that resulted in 36 people being arrested by the specialist officers and 44 years in prison sentences being imposed by the courts for cases brought by the team.

Included in the 36 people arrested in July was 26-year-old, from Erith . He was stopped by officers following a fight in Lowfield Street on 17 July.

He is the second person to be charged in connection with the events in Lowfield Street.

A 21-year-old man from Gravesend, was arrested for his alleged involvement on Sunday 18 July and later charged with wounding with intent.

Two other men, aged 39 and 26, were also arrested on the evening of the incident on suspicion of being concerned in the supply of class A drugs. They have been bailed, pending further enquiries, until 11 and 13 August respectively.

Also arrested by the team was a suspected drug dealer who attempted to evade police by jumping from a second-floor window.

On Wednesday, 28 July the team executed a warrant at a flat in Orchard Street, Dartford. As the officers entered a man jumped out of the window, grabbing onto the ledge as he fell. An officer pulled him to safety and the two people in the flat were arrested.

A 29-year-old man from Camberwell was charged with two counts of possessing class A drugs and possession of criminal property.

They both appeared before Medway Magistrates Court on 27 July and the next hearing will be at Woolwich Crown Court on 26 August 2021.

A Gillingham drug dealer arrested by the team has been sentenced to prison.

Unbeknownst to the man, plain clothed officers were carrying out a proactive patrol when they noticed him supply two different people with class A substances in May 2021.

The 19-year-old, from Gillingham, was promptly detained and later admitted possessing both drugs with intent to supply.

He also admitted acquiring criminal property, namely £230 in cash obtained through selling drugs, and was sentenced to two and a half years at Maidstone Crown Court on Wednesday 21 July 2021.

Detective Superintendent Shaun White said: ‘The action last month was a result of months of hard work and planning by the County Lines and Gangs Team. The officers have been successful in taking a large quantity of drugs off the streets and arrested over 30 people.

‘The cash seizures made will cause significant disruption to the drug supply network. This is money the dealers need to rent properties to run their illegal operations and the seizure of their assets will prevent them from starting up their illicit trade in our community.

‘Though the success in July is encouraging, we will not rest on our laurels and will be hot on the heels of the next dealers ready to fill the shoes of those we have removed from the streets.’