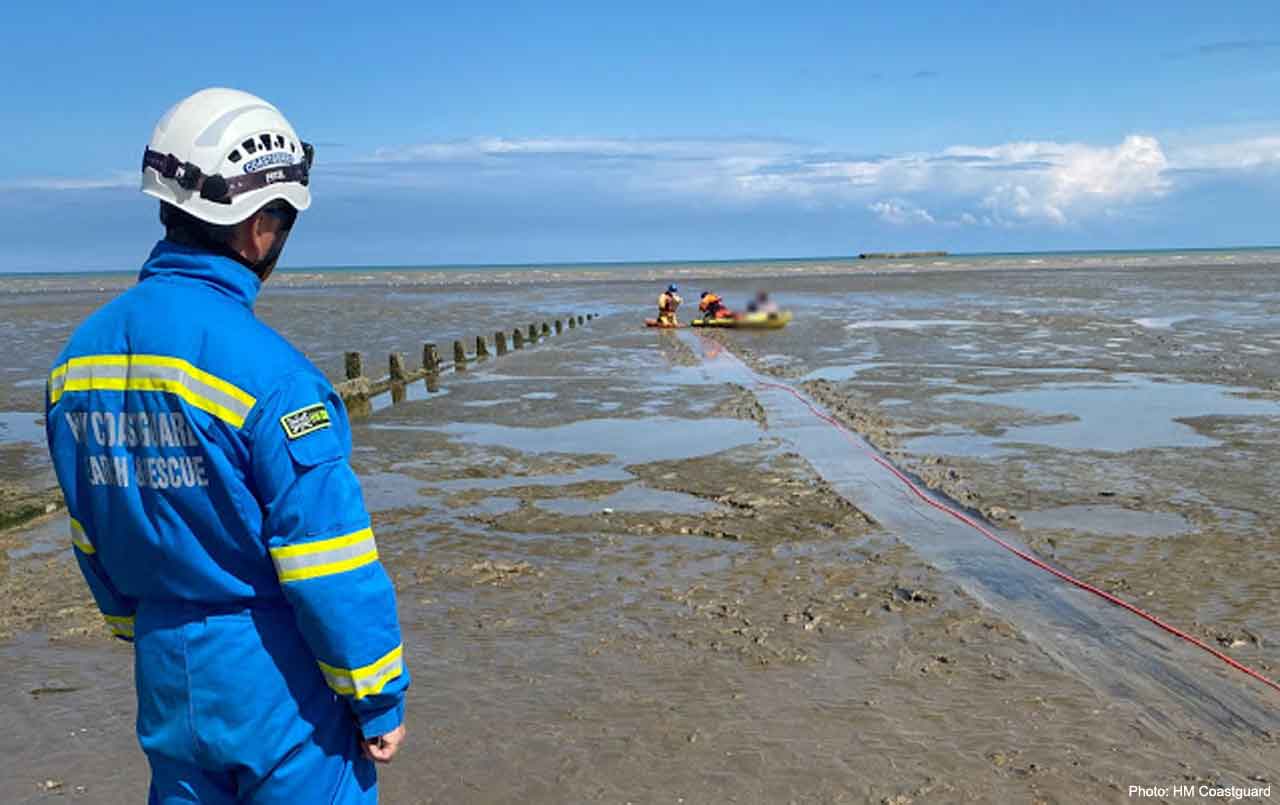 The rescue on Littlestone beach

A Coastguard rescue team were quick to respond after a family called 999 when a man became stuck in mud up to his waist on Littlestone beach as the tide began to come in.

Coastguards explained that knowing when to call 999 and ask for the coastguard in a coastal emergency helps them to help you and keep people safe.

This is exactly what one family did at Littlestone Beach when it became apparent that their trip to the coast wasn’t quite going according to plan.

Anne, her husband Ian and her sister, Jean, were enjoying the scenic surrounds of the east Kent Coast – with Ian walking to capture photos of the sea landscape given that the tide was out at a considerable distance.

And at what first just seemed and felt like normal squashed mud under foot – making for sticky but on the face of it, comfortable conditions, soon – just a few further metres out – it became more troubling.

The mud had thickened and was deeper, reaching up to Ian’s knees before getting level with his waist – not surprisingly grinding him to a complete halt.

Being aware that attempting to try and rescue Ian could risk themselves getting stuck in the mud away from shore, too, Anne and Jean called 999 and asked for coastguard assistance.

“The Coastguard Rescue Teams and Fire and Rescue Service arrived almost straightaway, and everyone was calm – it was amazing to see,” said Anne, a retired school Head Teacher, who lives in East Sussex with Ian.

“Ian just stayed completely still while the teams worked out how best to respond to the incident, with the appropriate equipment. We were highly impressed with the professionalism of all of the emergency service teams. The coastguard carried out the rescue operation and it all came to a swift conclusion with Ian being brought safely back to the shoreline.

“We’ve visited this stretch of coastline a number of times over the years but never ever experienced anything like that – we didn’t realise just quite how deep the mud could be. Fortunately, everything ended well but it’s a really good lesson to everybody of the dangers at the coast and why safety matters,” Anne added.

Alex Garrod, Senior Coastal Operations Officer with Her Majesty’s Coastguard in the South East of England, said: “This incident is yet another timely reminder of how unpredictable our coastline can be at times, often when you least expect something to happen and even if you are a frequent coastal visitor for activities and pleasure.

“In this instance, Coastguard Rescue Team technicians, Ash Hickman and Trevor Clark from Dungeness and Rye Bay Coastguard Rescue Team – supported by Kent Fire and Rescue Service, responded quickly, and with great skill – putting into practice their expert mud rescue training experiences – to help the gentleman who needed our assistance.

“I would like to thank all those involved in the rescue and it just goes to show the importance of knowing to call 999 and asking for the coastguard.

“This summer, we’re continuing to urge people to take extra care and if you become stuck in the mud, our advice is always the same ‘Stay calm, try and spread your weight as much as possible and avoid moving.”