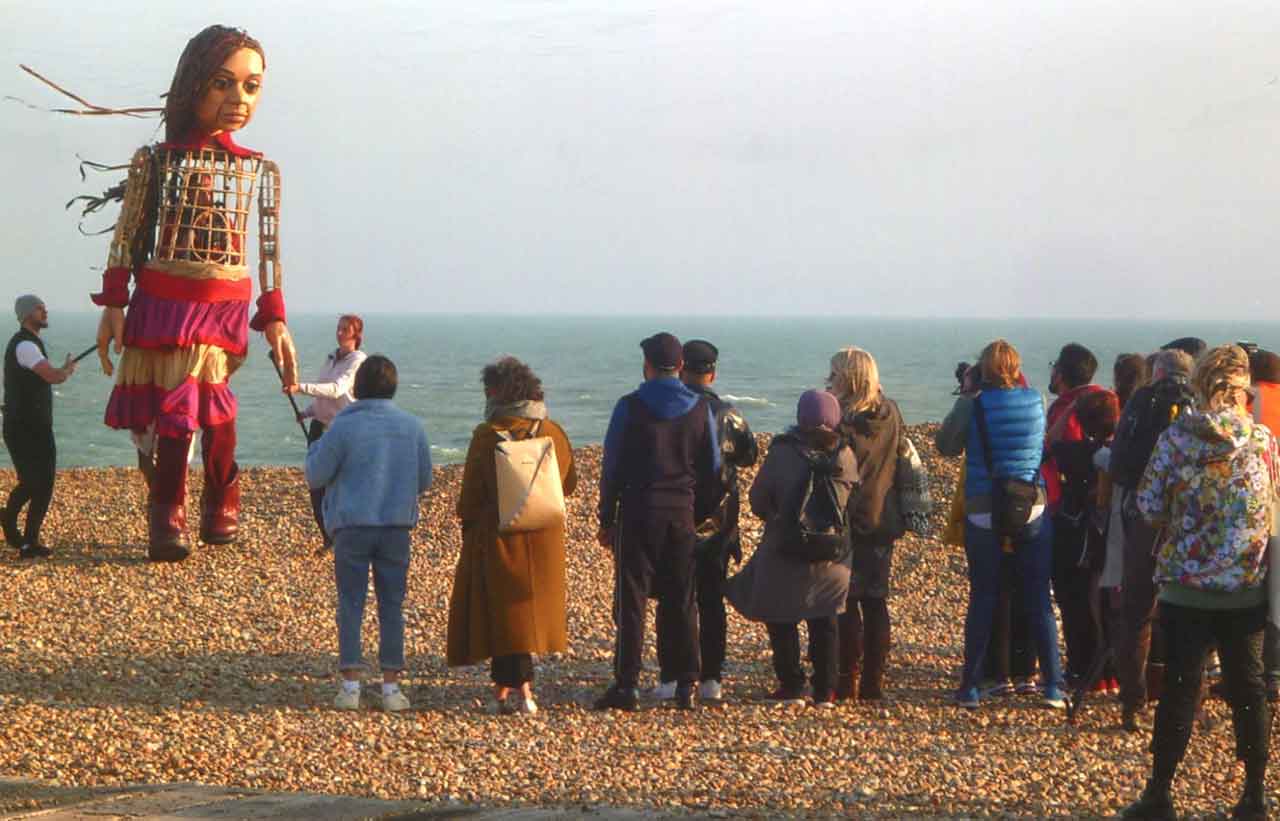 Little Amal is greeted on Folkestone beach by members of Kent Refugee Action Network and others. Photo: Ray Duff

Words and Photos by Ray Duff

More than 2,000 people gathered at Folkestone Harbour Station, the nearby beach and on the harbour walkway alongside Choirs, Kent Refugee Action Network (KRAN) and Folkestone Town Mayor, Cllr Michelle Keutenius to welcome an artwork representing refugees.

This was the first arrival point in Britain on the journey from Syria!

The 3.5m tall puppet, which depicts a nine year old Syrian refugee has been ‘walked’ all the way from Syria across Europe, with numerous welcoming stop off points in many countries, including a greeting by the Pope in Rome earlier this year, to help highlight the plight and need of refugees of all ages at the present time especially children.

The puppet itself is operated by a person within the structure with people on either side to help guide it along as it is walked.

The event was organised by Folketone Fringe and Creative Folkestone and earlier in the day Hollywood actor and refugee supporter, Jude Law; whose films have included, Sky Captain, The Talented Mr Ripley, Alfie and many others; joined members of The Beacon School on the Harbour Arm as part of the welcome.

At four o ‘clock and with people scrambling for a view, the puppet was then ‘walked’ up from the Channel shore edge near the Harbour Arm, seemingly looking scared and relieved aswell, to represent the sadly current situation of crossings of refugees, before being greeted by members of Kent Refugee Action Network and other welcoming organisations.

The puppet then turned and proceeded into the Harbour Station, former railway line area, to be greeted by the thousands, of all ages, attending who also listened to the a special song, written by acclaimed composer, choir director and local resident Anil Sebastian alongside KRAN; and performed by members of the London Contemporary Voices and/or the Citizens of the World Choir.

Moving through the crowd, Little Amal was then officially greeted and welcomed to Folkestone, and indeed Britain, by Folkestone Town Mayor, Cllr Michelle Keutenius; with former town Mayor Tom McNeice and his wife the Rev Kate McNeice watching, before proceeding again through the occasionally applauding throng to the end of the station and across the harbour viaduct where the event finished.

On Wednesday the puppet received a welcome from the Mayor of Dover at Pencester Gardens at 5.45pm, before a Lantern Parade, organised by Future Foundry, departed at 6.15pm for a ‘walk’ to Dover Castle.

On Thursday the events move to Canterbury Cathedral where Little Amal is due to meet the Archbishop of Canterbury before leaving at about noon for a Parade through the City centre and to the University of Kent organised by the Gulbenkian Theatre.

The puppet then journeys through London and onwards via Oxford, Coventry, Birmingham, Sheffield and Barnsley before arriving in Manchester on 3 November