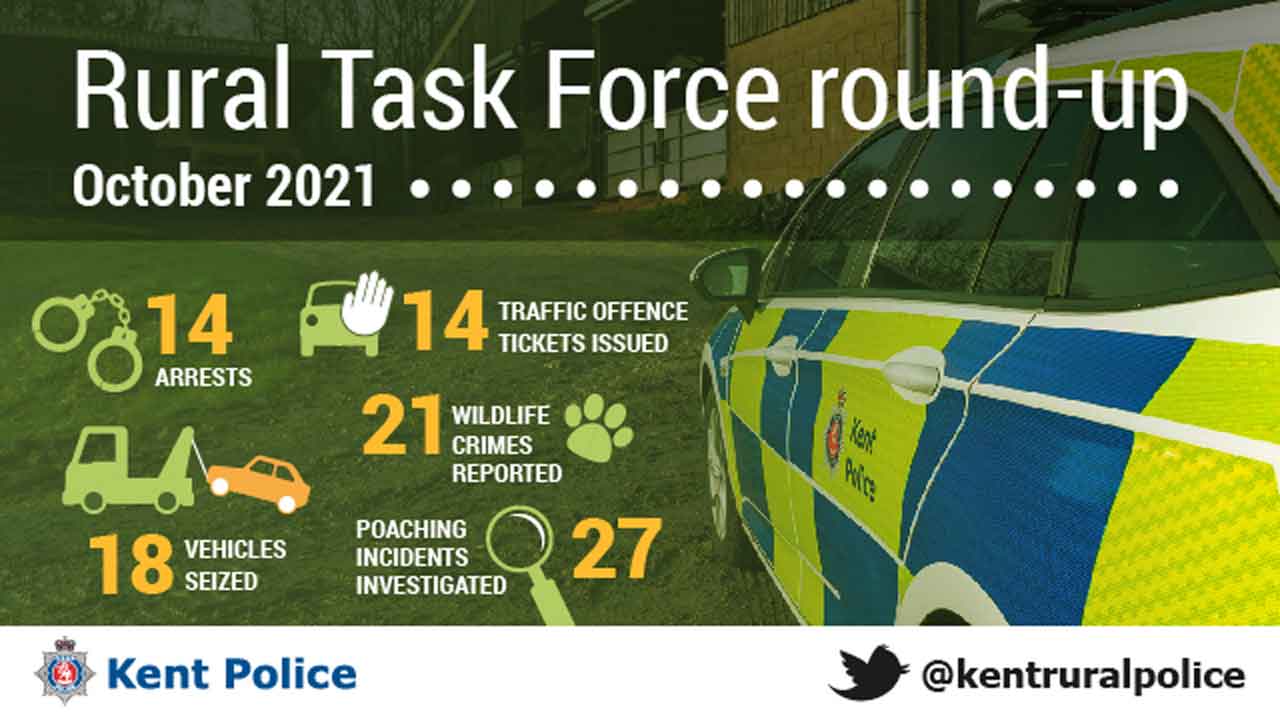 Officers from Kent Police’s Rural Task Force (RTF) have seized weapons and arrested 14 people as part of their efforts to combat rural crime in October.

In addition to the arrests the officers have seized 18 vehicles and issued 14 notices for traffic offences. They have also recovered suspected stolen property and made enquiries following a number of wildlife crimes being reported.

One incident resulted in a man being interviewed by officers in connection with the shooting of a heron. Police received a report that the large bird, which is a protected species under the Wildlife and Countryside Act, was shot dead in Chalk Hill, Ramsgate at around 11am on Saturday 16 October.

The officers from the RTF, who hold wildlife crime accreditations, investigated the report and seized a weapon. They have also interviewed a man in connection with the incident.

The team’s work to combat fly-tipping has continued throughout the month with days of action completed. The team worked alongside local authorities in Swale, Thanet, Dover and Maidstone. This led to a number of fines being issued to people dumping waste illegally and vehicles being seized.

Reports of vehicles being used anti-socially have also resulted in action from the RTF last month. The team stopped three men in Lodge Road, Staplehurst after reports of nuisance vehicles, and a review of CCTV showed the men performing wheelies and they were all issued with Section 59 warnings. This means if they are stopped again, the police have the power to seize their vehicles.

The efforts to combat hare coursing and illegal poaching remain ongoing and this has led to fishing rods, ball-bearings and catapults being seized and two men being issued with community protection warnings.

Sergeant Darren Walshaw of the Rural Task Force said: ‘The team have dealt with a wide variety of incidents and been involved in a number of operations aimed at improving the quality of life for residents.

‘We have seen a number of thefts from farms where machinery and vehicles have been stolen. On some occasions we have managed to locate and return the stolen property and my officers are continuing to investigate and gather intelligence around these incidents.

‘Often residents in rural communities can feel isolated and at times fearful, when they are targeted. We remain committed to bringing neighbourhoods together via our Farm Watch programme and providing a visible and reassuring policing presence in harder to reach areas.’