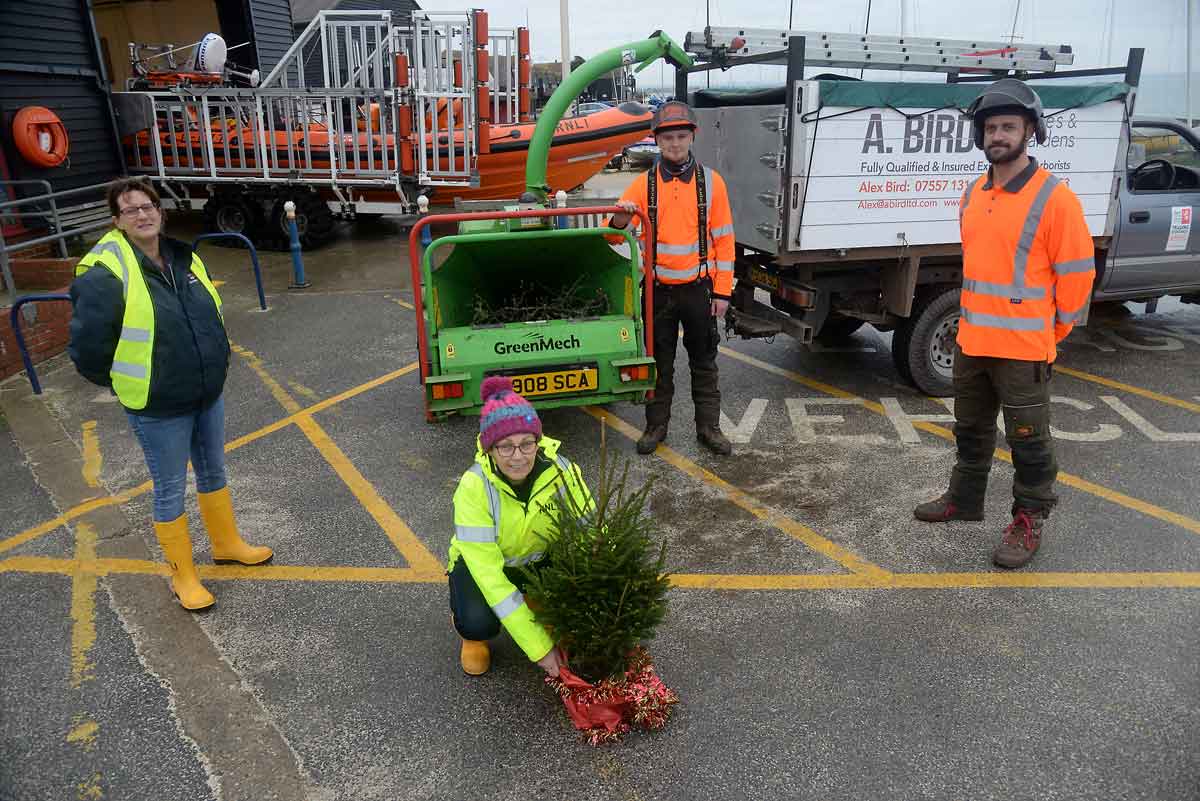 Crewmember Vicky Kypta and Kellie Gray, Chairman of the Whitstable Branch of the RNLI with Ellis Hood and Pete Reynolds of A. Bird Ltd who will be chipping Christmas trees in aid of the RNLI at Whitstable Lifeboat Station on Sunday 9 January Words and Photo: Chris Davey/Whitstable RNLI

The disposal of Christmas trees after the festive season is always a bit of a problem. However, tree surgeons, A Bird Ltd, have joined forces with Whitstable Lifeboat Station to offer a Christmas tree chipping service outside the lifeboat house on Sunday 9 January with proceeds going to the RNLI.

Kellie Gray, Chairman of the Whitstable Fundraising Branch of the RNLI said: ‘With the help of A Bird Ltd, we hope people will see that this is a suitable way of recycling their trees and in so doing raise valuable funds for the RNLI. They will be present at the boathouse between 10am and 1.00pm to receive trees and run them through their chipping machine. We have suggested a donation of £3.00 for the service and in addition, the RNLI shop will be open to serve hot drinks’.

Alex Bird said, ‘I have always been a follower of the RNLI and, living in Whitstable, I think it is very important that it is supported by the local community’.

‘My father, Dickie, when he was landlord of the East Kent also liked to get involved with fund raising activity for the station and the RNLI, so when I was approached by Nathan Tough, Area Community Manager for the RNLI, I was honoured to join forces with the station and hope that people around the area will take the opportunity to recycle their trees with the aim of enabling the Whitstable Lifeboat and the RNLI to continue to save lives at sea. Incidentally, we will also be doing tree chipping for the Pilgrims Hospice’.

Up until 15 Dec 2021, the volunteer crews at Whitstable lifeboat station have answered 46 calls to a variety of maritime incidents between Kingsferry Bridge in the Swale and Reculver in the east.