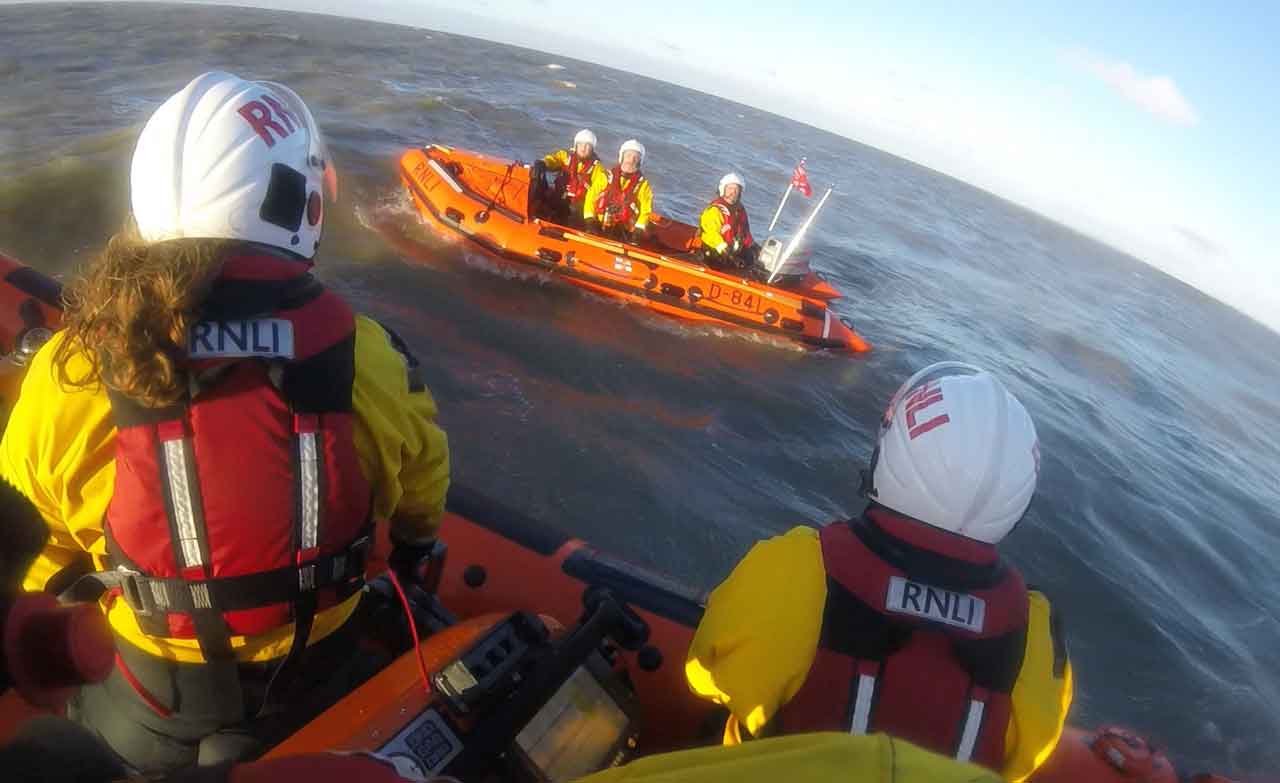 The Whitstable lifeboat crew liaise with the crew of the Margate D class lifeboat offshore from Bishopstone during operation on Wednesday afternoon Photo: Whitstable RNLI

A man who became cut off by a tidal surge and spring tide during a walk along the shore between Herne Bay and Reculver was helped to safety during an operation involving three lifeboats and two coastguard rescue teams on Wednesday afternoon, 5 January.

The Whitstable Atlantic 85 lifeboat Lewisco was launched at 1.50pm after the man had called the UK Coastguard to alert them of his situation.

When the lifeboat arrived, the crew spotted the casualty standing on the beach at the foot of the cliff between Bishopstone Glen and Reculver. The northwesterly force 6 winds and 1-metre swell meant that approaching the shore for the lifeboat would be difficult.

As he was clear of the water the lifeboat ‘stood off’ to await the arrival of the coastguard rescue teams and the Margate Atlantic 85 and D Class lifeboats that had also been tasked to assist.

On arrival the smaller Margate D class lifeboat approached the shore and the crew were able to speak to the casualty who confirmed he was alright.

After considering all the options it was decided that the on shore coastguard teams would recover the man by descending the cliff by rope and bring him up to the cliff top.

During this operation the three lifeboats remained in the area until the operating was successfully completed.

Whitstable lifeboat Operations Manager Mike Judge said “ A spring tide heightened by a tidal surge had blocked off sections of the beach stranding the individual as high water approached. The strong onshore wind had created too much sea for the person to be evacuated safely by lifeboat so the CG rescue teams conducted a recovery up the cliff using rope techniques for which they are trained.

“This incident highlights the importance of people being aware of what the tide is doing and that communications cannot always be relied upon in the vicinity of cliffs or high ground.”