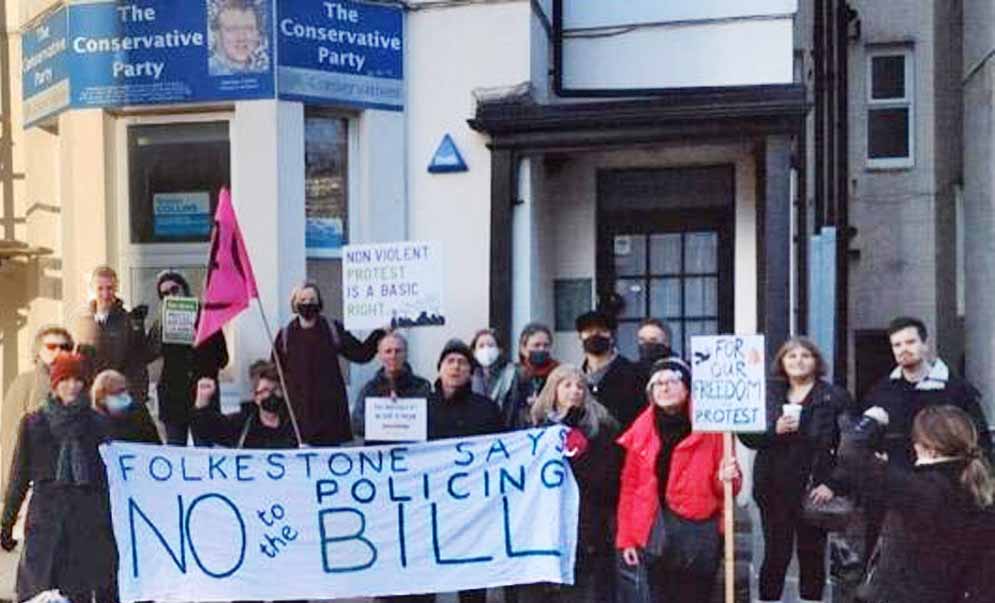 Protestors gathered outside Damian Collins MP’s Folkestone office on Tuesday to oppose the Police, Crime, Sentencing and Courts Bill which is currently being heard in the House of Lords.

Green Party district councillor, Georgina Treloar, who was at the event, said: “We’re here to try and persuade our MP to withdraw his support for the Bill, and particularly for a raft of amendments that criminalise some very basic rights of living and participating in a free society. Our MP has the power to influence Peers and the Government. We must not open the gates to authoritarianism.

“The past three years in particular have seen a rise in mass demonstrations and nonviolent civil disobedience calling for action on climate change, such as Extinction Rebellion and the School Strikes – and on racial inequality and social justice, as with the Black Lives Matter movement.”

Without disruption and protest, women would not have got the vote

Cllr Treloar continued: “Without disruption and protest, women would not have got the vote. History shows that it is people raising the alarm on important issues through nonviolent protest that makes our society better and fairer for everyone. In terms of climate change, the disruption caused by a breakdown in our climate, resulting from the failure of our governments to act, will be far far greater than any disruption from protests.”

Protestors at Tuesday’s event were concerned that the amendments to the Bill will criminalise any protest that might “interfere” with infrastructure such as roads, railways, oil refineries and printing presses; that this could be used to ban all effective protests, including protest against airport expansion and picketing by union members taking industrial action.

Also concerning, to those who attended, are expanded police “stop and search” powers, allowing the police to stop and search people or vehicles if they suspect they might be carrying any item that could be used in prohibited protests.

A prohibited protest is defined in the Bill as any protest that has “a relevant impact” on or causes “serious annoyance” to any two people within the vicinity of the protest, or that causes “serious disruption” to any organisation. Material for use in protests might include placards, banners, loudhailers or any other items commonly used by protesters.