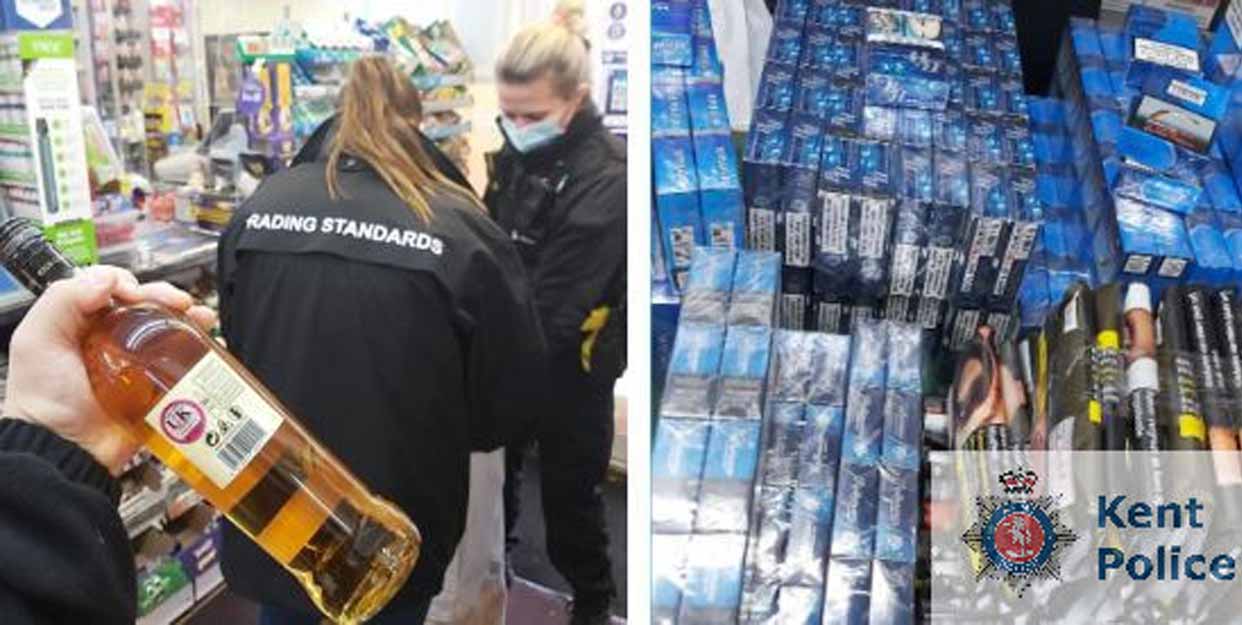 Boxes of suspected smuggled and counterfeit tobacco have been seized from a cavity above a ceiling at a Maidstone business.

The contraband was recovered at the premises in Knightrider Street on Wednesday 19 January 2022, during a joint operation involving police and Kent County Council Trading Standards.

Four other retailers were inspected, with seizures made at addresses in the High Street, King Street and Calder Road.

PC Jared Dungate, of the Maidstone Community Safety Unit, said: ‘The supply and sale of illicit cigarettes, tobacco and alcohol is often connected to organised crime groups and has a detrimental effect on law-abiding retailers who pay the relevant duties and taxes.

‘We will continue to pay regular visits to premises with our partners who will apply for closure orders where businesses persistently fail to comply with the law.’

Items recovered included illegal tobacco believed to be for sale without payment of the necessary UK duties, counterfeit whisky and banned e-cigarettes and vaping products. The total value of seizures is estimated to be between £15,000 and £20,000.

Kent County Council Principal Trading Standards Officer, Oliver Jewell said: ‘The e-cigarette devices seized were up to six times over the legal limit.
‘E-cigarettes that don’t meet UK requirements will have not undergone any of the necessary checks and as a result carry a risk of containing potentially harmful banned ingredients.
‘As well as posing a health risk, illegal tobacco brings crime into our communities and should not be tolerated. It undermines local businesses who follow the rules, funds organised crime and makes smoking more affordable for young people and those trying to quit the habit.
‘For all these reasons, we will continue to work alongside our enforcement partners to take action against the sale of illegal tobacco in Kent. Residents who become aware of shops selling illegal tobacco can also report them anonymously through 0300 999 6 999 or by visiting www.stop-illegal-tobacco.co.uk.‘