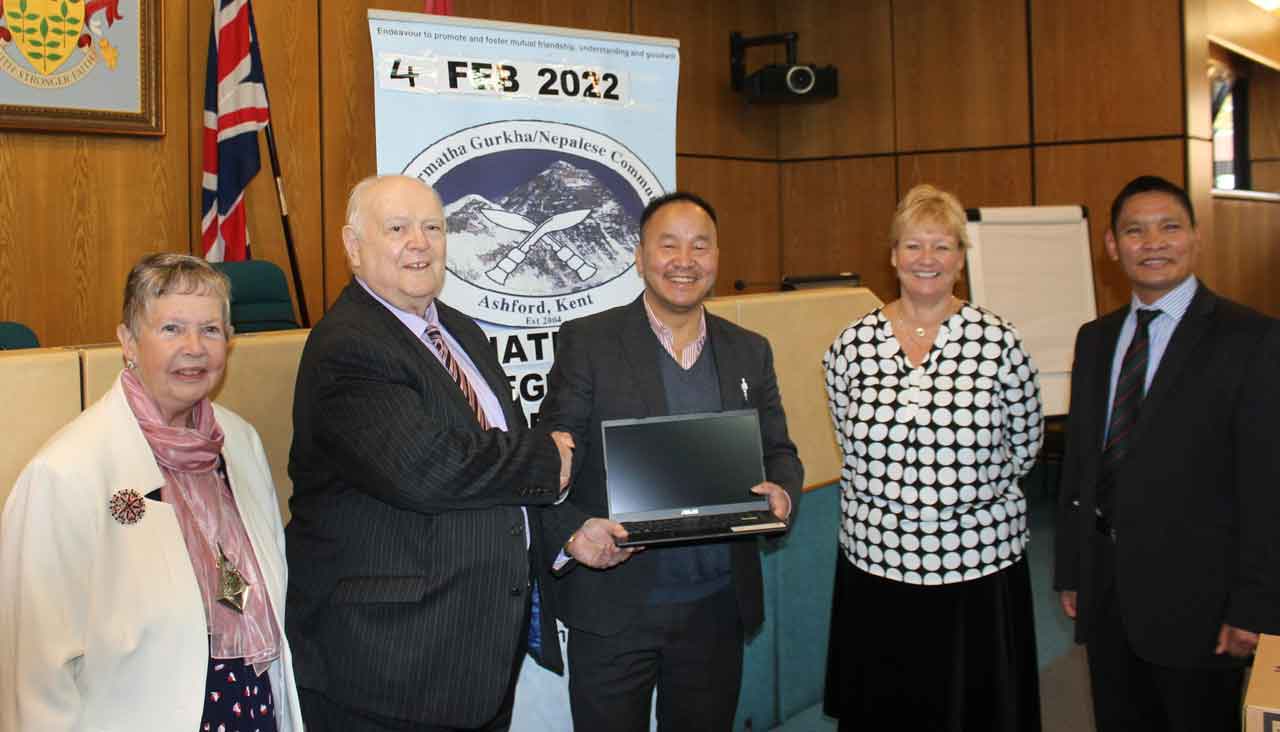 Nowhere is generosity more visible than among Ashford’s thriving Nepalese community where, in a heart-warming display of support, members of that community have raised funds for the children of Afghan families being housed temporarily in the area.

The money has purchased laptops to help Afghan children who are living in a ‘bridging hotel’ in Ashford with their school work. The laptops were gratefully received by the council to be passed to the Afghan children at a ceremony attended by representatives of the Sagarmatha Gurkha/Nepalese Community Ashford Kent (SGNCAK).

Dammar Singhak Limbu, senior vice chairman, SGNCAK, said: “When we heard about the many hardships that our Afghan friends have had to endure in fleeing for their lives from their home country, then our community in Ashford knew we had to do something to support them.

“We hope these laptops will help the children with their school work, so they can go on and build happy new lives for themselves in Britain.”

When Kabul fell there was a scramble to evacuate thousands of individuals and their families who had worked with our armed forces and British government. Ashford Borough Council was one of the first to react, pledging to permanently rehome up to ten Afghan families in the first year, as part of a Government permanent resettlement scheme.

Separately, a hotel in Ashford was chosen by the Home Office to temporarily house Afghan families while efforts continued to find them permanent homes in the UK.  At any one time there are around 140 Afghan men, women and children living at the hotel. The children are in local schools and the laptops will be distributed among these youngsters.

The support for the Afghan children is not a one-off for the Gurkha community – in the past 18 months they have raised nearly £7,000 in support of the NHS as it battles the Covid pandemic plus it has provided much-needed donations to local food banks.

Ashford Borough Council has been in the forefront of supporting the bridging hotel project, with staff volunteering to be part of the team based at the hotel, providing welfare and wellbeing support, overseeing medical assistance, including mental health support for some left traumatised by their experiences in fleeing Afghanistan.

Our staff have helped provide translation services and been on hand to offer a friendly word to ensure their time spent living in the area is as positive as possible. A huge effort is also going to prepare the Afghans for life in the UK, with sessions designed to open their eyes to British culture, how society works and what’s expected of them as citizens.

The council receives funding from the Home Office to cover the costs of supporting the families, ensuring there is no financial burden on the services we provide to residents and businesses. The Home Office has extended the contract to use the Ashford hotel, so our support for the Afghans living there will continue well into 2022.

Big-hearted local residents and organisations greeted the news that Afghan evacuees had arrived in the borough by donating huge amounts of clothing, toiletries and toys. Any surplus was shared with charities. Local businesses also helped – Kings barbers in Ashford visited the hotel to provide free haircuts for the men and boys, while Ashford College invited a group of women to come and meet their students and enjoy their own hairdressing appointments.

Cllr Gerry Clarkson, Leader of Ashford Borough Council, said: “The response from residents to the arrival of our Afghan friends has been magnificent. Our hard-working staff have been overwhelmed by the generosity and kindness shown by local people and on their behalf I’d like to thank everyone for their support.

“We often talk about ourselves as a caring borough and it’s at times like this that we realise just how important that is as we help these people come to terms with the traumatic events they have lived through.

“The donation of the laptops from our friends in the Nepalese community who have made their homes in Ashford is a wonderful thing, and I’m so proud of the people who rally around to support each other in difficult times like this.”