Swanscombe saved – for now – but Theme Park fight is not over! 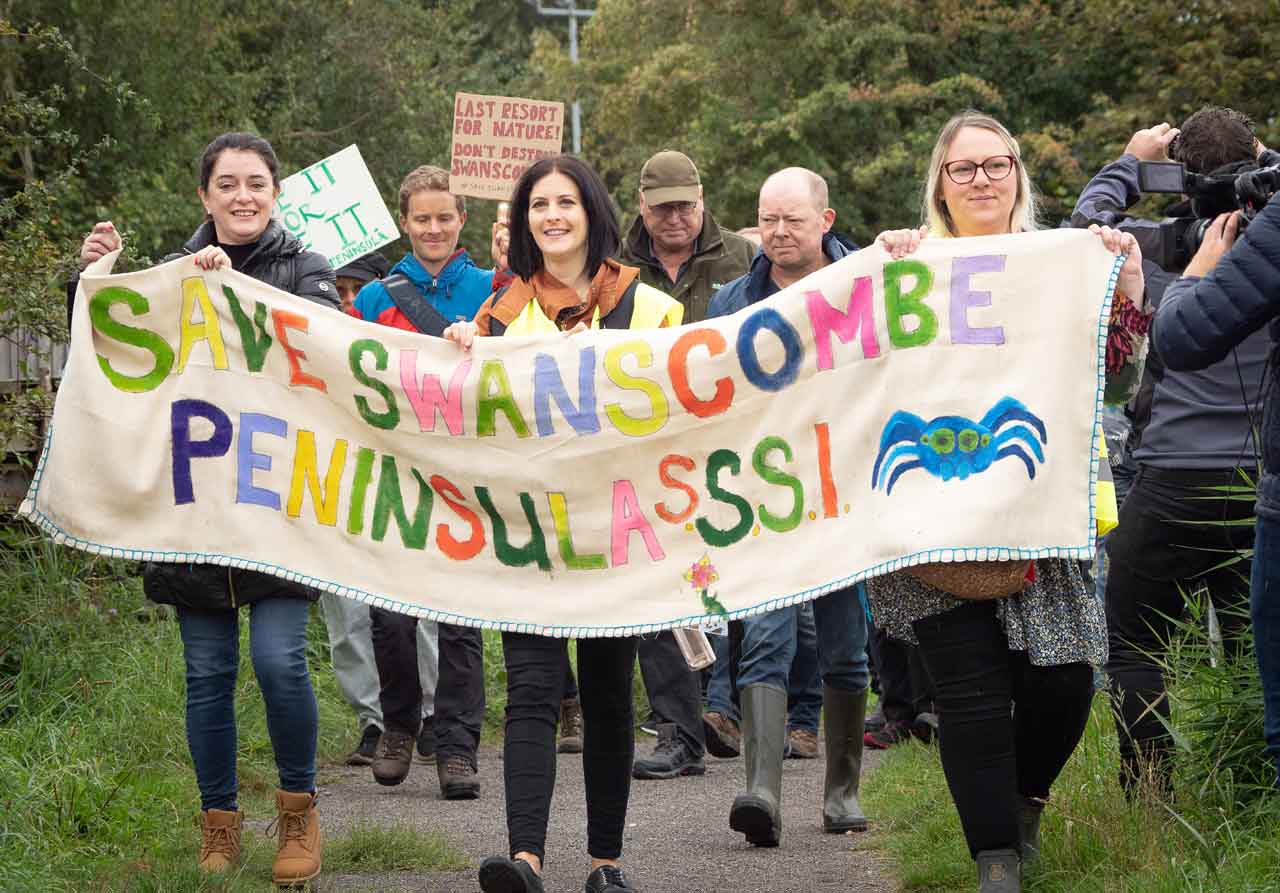 Swanscombe protest walk to save the SSSI Photo: (c) Richard-Bayfield

Plans to build a theme park in North Kent on top of 100ha of a nationally important wildlife site have been withdrawn at the eleventh hour by the applicant – but the fight to save this haven of biodiversity is far from over.

Proposals for the ‘London Resort’ theme park to be built on the Swanscombe Peninsula – a Site of Special Scientific Interest (SSSI) – was met with shock and anger from local campaigners and national wildlife charities.

Following over a year of discussions, protests and petitions, London Resort Company Holdings (LRCH) has finally withdrawn its application. However, they plan to resubmit the application for development later in the year; so wildlife charities are continuing to call on the government to do everything it can to step in and save the nature haven.

Buglife, CPRE Kent, The RSPB and Kent Wildlife Trust (KWT) have been working together to stand up for the site’s outstanding wildlife, alongside local campaign group, Save Swanscombe Peninsula SSSI. Together, they were preparing for the Nationally Significant Infrastructure (NSIP) examination which was due to start today and outline a six month examination, but the withdrawal has once again pushed their frequently delayed plans further down the road.

Nicky Britton-Williams, Wilder Towns Officer at Kent Wildlife Trust said: “We are thrilled that London Resort have finally withdrawn their application but the Swanscombe Peninsula isn’t safe yet. It is unbelievable that in a period of climate emergency and biodiversity crisis, that this SSSI site, and all the nature and wildlife it supports, is still under threat. Until the NSIP status is withdrawn and the site put under the management of responsible wildlife charities, this urban oasis of wildlife remains at risk and we, and our partners, will do all we can to protect it.”

The Swanscombe Peninsula is incredibly rich in wildlife, home to some of the UK’s most threatened species of plants and animals. Over 2,000 species of insects and other invertebrates have been recorded here, including the Critically Endangered distinguished jumping spider. It is also the richest site for breeding birds in the South East, living side-by-side with otters, water voles and rare plants such as the man orchid.

This amazing diversity is thanks to this site’s remarkable mosaic of grasslands, coastal habitats, scrub and intricate wetlands, much of which is brownfield habitat that has been reclaimed by nature.

In recognition of its valuable wildlife, it was designated a SSSI last year by Natural England, the national body responsible for wildlife. SSSIs like the Swanscombe Peninsula are the backbone of the UK’s protected sites network. They include our best habitats and are essential to protecting wildlife and supporting healthy ecosystems.

Despite the site being nationally notified for its wildlife, the London Resort proposals were due to be considered by the Planning Inspectorate as a NSIP, a process normally reserved for major roads, airports or power plants.

If this shocking development is allowed to go ahead it would have devastating consequences for the natural environment.

Once these unique habitats are lost, they cannot be replaced. This development would set a terrible precedent.  In the words of the man in charge of the London Resort – “the UK deserves better”. Indeed it does: what the UK needs now, and for future generations, is the protection of our natural world.

Jamie Robins, Programmes Manager at Buglife said : “The London Resort would be one of the largest ever losses of designated habitat in England. At a time when the value of wildlife and open spaces is being appreciated more than ever and amid ongoing declines in some of our best loved wildlife, we need to be clear that our SSSIs, our national treasures, should be out of bounds to developers. Now that the application has been withdrawn, we have to make sure that the proposals never come forward again and the site can be kept for nature.”

Vicky Ellis, General Manager at CPRE Kent said: “We are delighted that this amazing SSSI and its precious flora and fauna has been saved from becoming a theme park for the time being. However, we are aware that the threat to this SSSI site remains, so we must not rest on our laurels in this fight to protect this special area from inappropriate development.”

Craig Bennett, Chief Executive of The Wildlife Trusts said: “We’re delighted the application has been withdrawn so the Swanscombe Peninsula can remain a haven for endangered and rare wildlife, rather than being sacrificed for an unnatural theme park. “Land designations exist to protect our most important sites from overzealous developers. To restore the natural world, it is vital the Government resists calls to change the rules to make it easier to build on SSSIs and other important wild places.

“The so-called London Resort would have been a travesty for nature. Let’s hope this is the end of the line for the project and Swanscombe can be left doing what it does best – providing crucial habitat for marsh harriers and water voles, and green, natural space for local people.”

Emma Marsh, RSPB England Director said: “We welcome the news that London Resort have withdrawn their application for a theme park on Swanscombe. Swanscombe is an incredibly special place, its rich wildlife was recognised by its confirmation as a Site of Special Scientific Interest last year, making it one of the jewels in the crown of UK nature sites. It is simply the wrong place to propose building a theme park. We will monitor any updated plans put forward by London Resort and will do all we can to protect this vital space for the local community and the incredible wildlife it supports.”