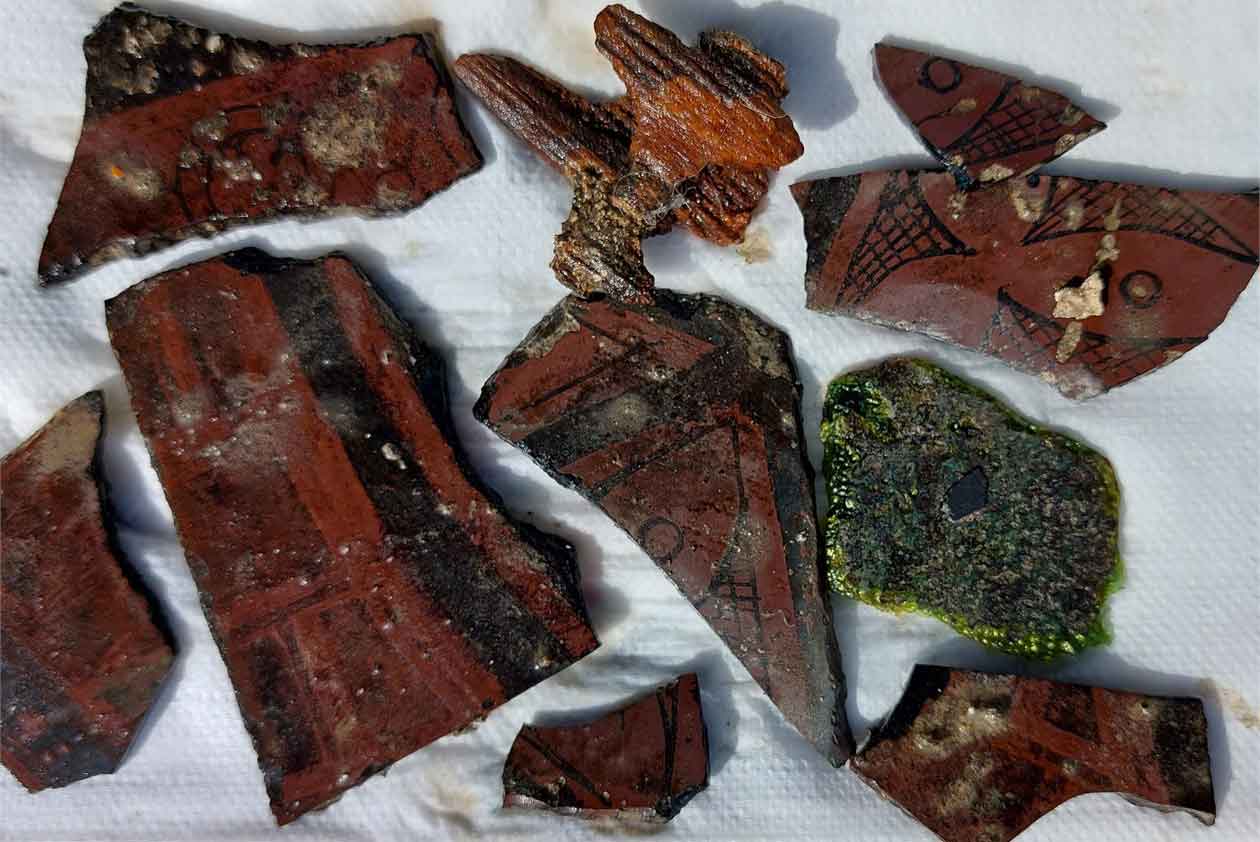 Stained glass discovered at the Maison Dieu in Dover

Archaeologists have unearthed fragments of glass original to the Maison Dieu building in Dover, and some of the oldest medieval stained-glass in the country.

Volunteer archaeologists working alongside the Canterbury Archaeological Trust have discovered a host of exciting finds that shed light on the early history of Dover’s historic Maison Dieu.

Unearthed during the recent History Diggers community archaeological dig (7 to 11 April) outside a blocked-up doorway to the medieval Stone Hall, the artefacts include carved fragments of window tracery, glazed Tudor floor tiles, sherds of pottery and numerous animal bones.

However, the most spectacular finds weren’t revealed until the final afternoon of the excavation, when over 50 small fragments of decorated window glass were found in a rubble layer beneath one of the Stone Hall’s six medieval windows. They were discovered by local volunteers Stephen Callister, Abi Holness and Jude Roussel who were all on their first archaeological dig.

Covered in sticky grey soil, the fragments looked more like pieces of roof slate, until they were carefully washed. Then almost magically, flower, leaf and architectural patterns began to appear, outlined in black pigment on a chocolate brown background. A breath-taking moment for all involved!

Photographs of the glass have already been seen by medieval stained-glass experts Léonie Seliger (Director of Stained Glass Conservation at Canterbury Cathedral) and Dr Richard Marks (art historian and Emeritus Professor in the Department of Art History at the University of York) – who believes the fragments date from the late 1200s or early 1300s and are reminiscent of designs at Salisbury Cathedral and Westminster Abbey.

Oldest medieval stained-glass in the country

Dr Richard Marks’ initial identification ties in perfectly with the date the Stone Hall was built (circa 1290), which would make the glass original to the building and some of the oldest medieval stained-glass in the country.

“This is a very exciting find. Domestic glass – glass not from cathedrals and churches – from the late 13th century is exceptionally rare and valuable and each new discovery adds to our knowledge. I am looking forward to being kept in touch with developments,” said Dr Marks.

Dover’s Maison Dieu (or House of God) was founded by Hubert de Burgh in the early 1200s as a place for poor pilgrims to stay the night on their way to the shrine of St Thomas Becket at Canterbury Cathedral, or when travelling to the Continent. Pilgrims received free bed and board (weak beer and bread) from the Augustinian monks who looked after the building. The impressive Stone Hall was built circa 1290.

There were regular visits by royalty who used it as a meeting place. The chapel was dedicated by Henry III. Members of the royal household also lodged here when the king was at Dover Castle.

After the Reformation the building served as a victualling office producing ship’s biscuit, beer and salted beef and pork for the Royal Navy. Victuals (pronounced vittles) was a once common term for a stock or supply of food.

In the 1830s the Maison Dieu was bought by the Dover Corporation, becoming Dover Town Hall and more recently a popular events venue.

The glass is of an early type known as grisaille, from the French for grey, though small pieces of red, green, blue and yellow glass were also incorporated in geometric patterns that commonly included flower and leaf designs. Fragments of green glass are among those found at the Maison Dieu.

Some of the earliest examples of grisaille in the UK are found in East Kent, in stained glass windows at Stodmarsh, Brabourne and Hastingleigh parish churches.

Almost 30,000 fragments of medieval glass, including early grisaille fragments were discovered in 2015 in the roof spaces of Westminster Abbey and are now on display in the Queen’s Diamond Jubilee Galleries.

Interestingly, the Maison Dieu fragments were discovered less than a metre down, in a post-medieval rubble layer. It’s believed they may be from the edge or upper tracery of one of the original medieval windows, that survived intact when the rest of the glass was destroyed at the Reformation.

The window spaces were later filled in with brick and stone (probably in the late 1500s) when the building was converted into a bakehouse. A 1735 print by Nathaniel Buck shows these blocked-up windows. Patches of what appears to be lime mortar on many the glass fragments may well date from when the windows were blocked up.

The stone and surviving glass fragments were later knocked out, together with the remaining pieces of window tracery, perhaps after a devastating fire gutted the building in 1745. Fragments of Caen stone window tracery, found in the dig, charred and turned pink by the heat of a fire are possible evidence of this dramatic moment.

The surface of a probable Tudor yard was also uncovered, confirming past street level lay at approximately 80cm below the current surface. An intriguing stone and brick-lined pit was later – possibly an 18th or early 19th century soakaway for the disposal of wastewater. The area excavated was described as a baker’s yard in a 1677 survey – when the Stone Hall was used as a backe house (bakehouse) and flesh (meat) storehouse as part of His Majesty’s Victualling Storehouses.

Two fragments of a floor tile, dating to the 16th or early 17th century also tell a story. Part of the yellow surface glaze has been worn away, leaving a curved line of grooves – evidence of a badly fitting door that scraped across the floor as it was opened and closed. We can only imagine the oaths and curses (similar to those used in Shakespeare perhaps?) used by those who had to use it. As lead archaeologist Keith Parfitt of Canterbury Archaeological Trust commented. They needed to have taken a quarter of an inch off that! Waiting for workmen to do minor repairs isn’t something new.

The finds also included the skeletons of two dogs, perhaps kept as pets or rat catchers when the building was a bakehouse and storehouse for the Royal Navy.

Over 300 people visited the Maison Dieu dig site, chatting to archaeologists and dig volunteers and investigating finds in close-up detail. Over 70 children enjoyed excavating their own mini-digs and creating medieval tiles.

A small exhibition of finds from the Maison Dieu Stone Hall archaeological dig is planned for later this year at Dover Museum, once further research has been completed.

For information about two further Maison Dieu community archaeological digs in July and September and how to get involved, visit www.maisondieudover.org.uk