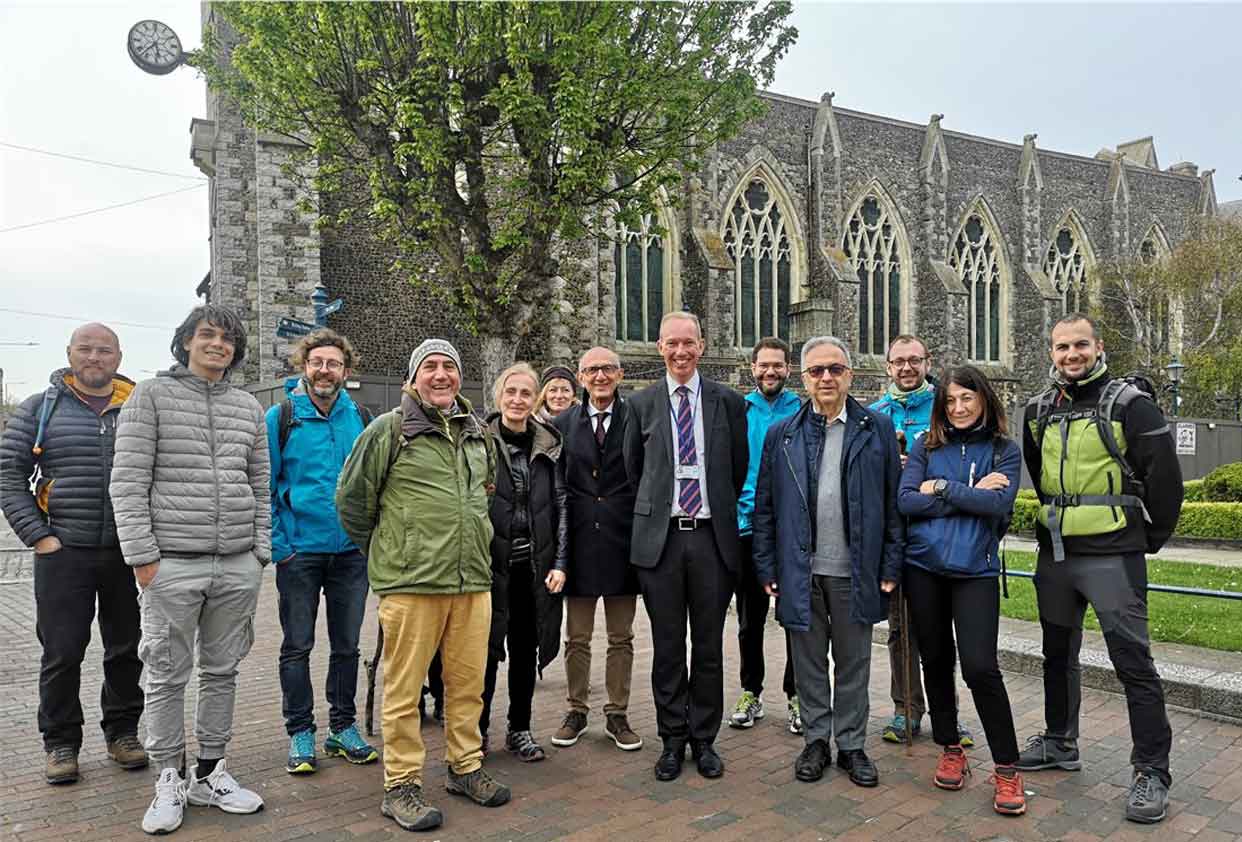 An international delegation from the European Association of the Francigena Ways (EAVF) and the Confraternity of Pilgrims to Rome visited Dover’s historic Maison Dieu as part of plans to put Dover back on the map for thousands of pilgrims who cross the Channel each year.

Cllr Trevor Bartlett, the Leader of Dover District Council welcomed Massimo Tedeschi, EAVF President, and Giancarlo Laurenzi OBE, Chair of the Confraternity of Pilgrims to Rome at the Maison Dieu following a 10km walk along the North Downs Way, part of the Via Francigena the UK’s only walking European cultural route from Canterbury to Dover.

The visit comes ahead of the Kent Pilgrim Festival which runs between 21 and 25 September 2022 in Dover, Canterbury and villages on the pilgrim route between them on the North Downs Way. This inclusive partnership event celebrates pilgrimage of all faiths and none, its historic origins and popularity today, including Green Pilgrimage and walking and cycling for health and wellbeing. It will include walks, talks, pilgrim workshops, art, craft, drama and music events.

Hubert de Burgh founded the earliest parts of the Maison Dieu around 1203 as a medieval hospital, providing accommodation for poor pilgrims journeying from Continental Europe on their way to the shrine of St Thomas Becket at Canterbury.

Dover District Council has embarked on a £9.1m reawakening of the Maison Dieu with support from the National Lottery Heritage Fund, the Wolfson Foundation, the Landmark Trust, Dover Society, and Dover Town Council.

Alongside the restoration, a wide-ranging programme of community, cultural and educational activities is helping local people and visitors alike to better understand the historical significance of the 800-year-old building which is Grade I Listed and a Scheduled Monument.

Cllr Trevor Bartlett, Leader of Dover District Council, said: “We are aiming to put Dover back on the pilgrimage map with our stunning restoration of the Maison Dieu, one of the few remaining medieval hospitals in the country.

“It was a pleasure to welcome the delegation from the European Association of the Francigena Ways, and the Confraternity of Pilgrims to Rome to show them around the Maison Dieu and to explore ways in which we can bring even more international visitors to the town to explore this magnificent building.”