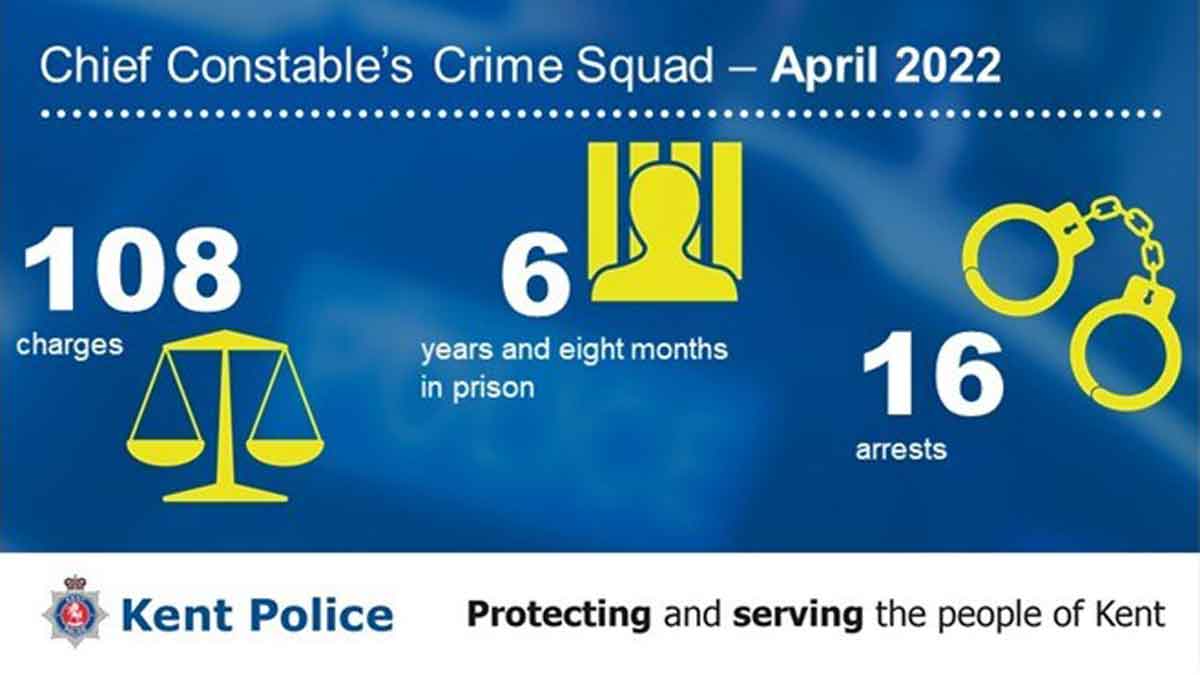 More than 100 charges were issued by a single Kent Police team during April.

Each month Kent Police’s Chief Constable’s Crime Squad seeks to target prolific and high harm criminals, with the past 30 days being no exception.

A total of 108 charges were authorised in the timeframe, with 16 arrests also made and 18 warrants carried out.

In addition to these fresh cases, a Dartford bank robber who threatened a cashier with a knife was jailed for more than five years.

The offence happened at the end of February 2022 and saw the offender steal around £400 in cash. He handed himself into Kent Police two days later and was promptly charged.

Speedy justice also led to a Tunbridge Wells burglar being jailed for one year and four months. He stole around £250 in cash from the victim’s home before spending some of the cash at a nearby pub.

Detailed CCTV enquiries led to officers arresting him within 48 hours of the crime being committed and in mid-April he was sentenced by the courts – less than two months after the offence was committed.

Among those charged in April is a man who is alleged to have burgled 45 shops across the southeast of England, including 11 offences committed across Maidstone, Aylesford, Gillingham, Sevenoaks, Broadstairs and Tunbridge Wells.

A woman has also been charged with 16 offences committed across the same series. Both are due to answer the charges at Maidstone Crown Court at the end of the month.

Also charged is a man who is suspected to have stolen jewellery from three homes in Dover. He has been remanded in custody and is due to appear at Canterbury Crown Court at the end of May.

Equally robust action was taken against a man who is alleged to have burgled a Gravesend home before stealing a mobile phone. He has been remanded in custody and will appear at Woolwich Crown Court in mid-May.

Detective Chief Inspector Matt Talboys, who leads the team, said: ‘Since the start of the year our investigations have already led to offenders being jailed for more than 100 years, but our returns for April show we are not resting on these laurels.

‘Achieving 108 charges in a calendar month is a testament to our commitment to provide victims with the best possible service, making Kent a safer place in the process.’