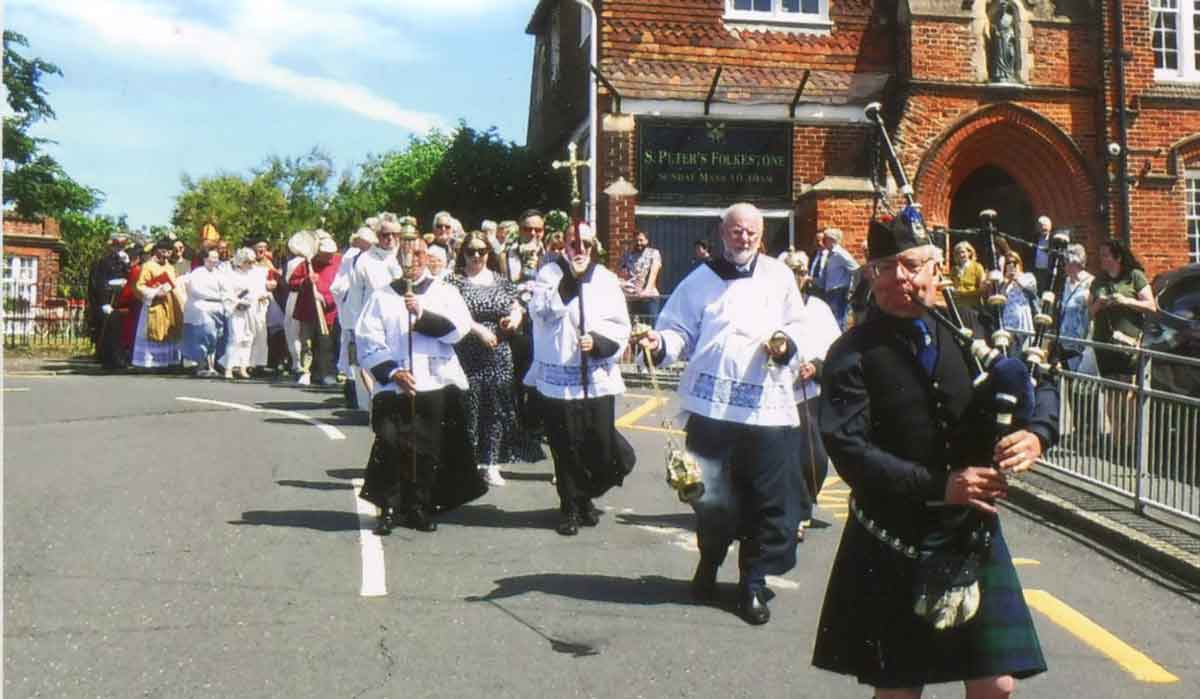 By Ray Duff – Large crowds gathered for the normally annual ceremony of blessing the fisheries for the first time in three years due to the pandemic.

The religious and Mayoral processions from St Peter’s Church on The Durlocks above the harbour was once again led by piper Christopher Bone from outside the Church, via The Durlocks, North Street and Radnor Street, to The Stade. Upon its arrival the party gathered on and around the large apron area, near the far end of The Stade and joined the Salvation Army Band, for the ceremony.

In front of the apron the Mayoral party which included the Town Mayor of Folkestone Cllr Nicola Keen, Deputy Mayor Cllr Belinda Walker, the Town Sergeant Ian Bishop, and several other local councillors alongside members of the congregation of St Peter’s and the public gathered.

It was opened with prayers and a short  welcome by the Father Mark Haldon-Jones, the vicar of St Peter’s who then introduced the Right Reverend Richard Llewellin, former Bishop of Dover who conducted this years service.

During the ceremony he gave the event a humorous tone during the singing, eventually acapella, of the first hymn Eternal Father, followed by relating how the fisheries were one of the most dangerous professions and how grateful we need to be for their efforts. He went on to speak of the need to conserve the oceans including stopping the dumping of plastics and other waste materials.

After prayers, the Rev Llewellin walked forward to the edge of the apron to officially bless the sea, its harvest, the boats, their equipment and the men and women who make their way upon the waters, first with incense and holy water.

The gathering then returned, again led by piper Chris Bone, back up to St Peter’s where a short service was held before everyone retired to St Andrew’s Garden for refreshments.