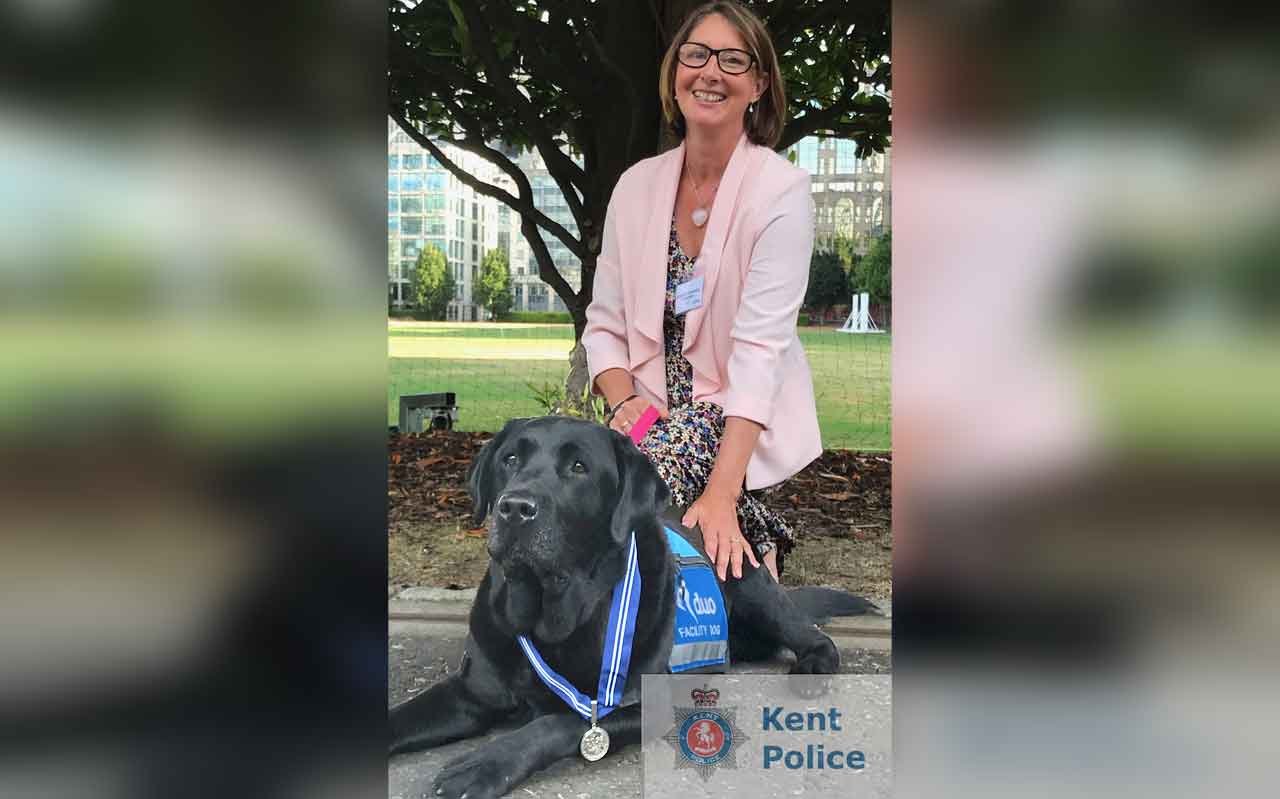 Oliver, a six-year-old black labrador, who has been assisting Kent Police by comforting victims and witnesses following traumatic experiences has been awarded with a medal.

Detective Constable Rachel Freeman who has been working with Oliver in Kent was delighted to see him presented with a PDSA Order of Merit at an awards ceremony in London for his outstanding contribution to society.

The event took place on Thursday 14 July 2022 where Oliver was joined by Rachel and one of his handlers, Doctor Elizabeth Spruin, who is a psychologist and has been working with him since he was flown to the UK from America in 2018 and her colleague Doctor Katarina Mozova.

Oliver has been specially trained to support vulnerable victims and witnesses of crime and has been part of a project between Kent Police and Canterbury Christchurch University to see if he can make a difference, the first scheme of its kind in the UK.

DC Rachel Freeman said: ‘I first became involved with Oliver at our police college where I trained officers in how to interview vulnerable victims.

‘As a specialist safeguarding officer, I was aware of how dogs like Oliver were supporting victims in America and Canada and was really struck by how helpful this could be and really hoped one day we would have dogs like him in the UK.

‘It then became a reality and I started working with Doctor Spruin and Doctor Mozova, to enable Oliver to support vulnerable victims in Kent whilst they talk to officers during police interviews.’

Awarded for his devotion

The PDSA Order of Merit is given to animals in recognition of exceptional acts of devotion to their owners or society and represents outstanding examples of the special bond that exists between animals and humans.

DC Freeman added: ‘Oliver is so calm and often just sits next to someone or by their feet to provide a little reassurance. Children respond well to him and often reach out for cuddles. He is also able to sense feelings and reacts kindly when someone is upset. I witnessed him put his paw on a young girl’s back to reassure her that he was still there with her whilst she navigated her well through some difficult questions.
‘A police station can be a scary place for those most vulnerable in our society and having a dog like Oliver is just one way we can help smooth the process for them.
‘I am so proud he has received this award and I hope it raises the profile of the project an encourages other forces across the country to follow suit.’

PDSA Vet Nurse, Nina Downing, said: ‘PDSA is honoured to celebrate Oliver’s pioneering and vital role, assisting those most in need of support. We have been incredibly moved by his life-changing actions. Oliver is a thoroughly deserving recipient of the PDSA Order of Merit’.