Ramsgate RNLI and Coastguards rescue couple from the incoming tide 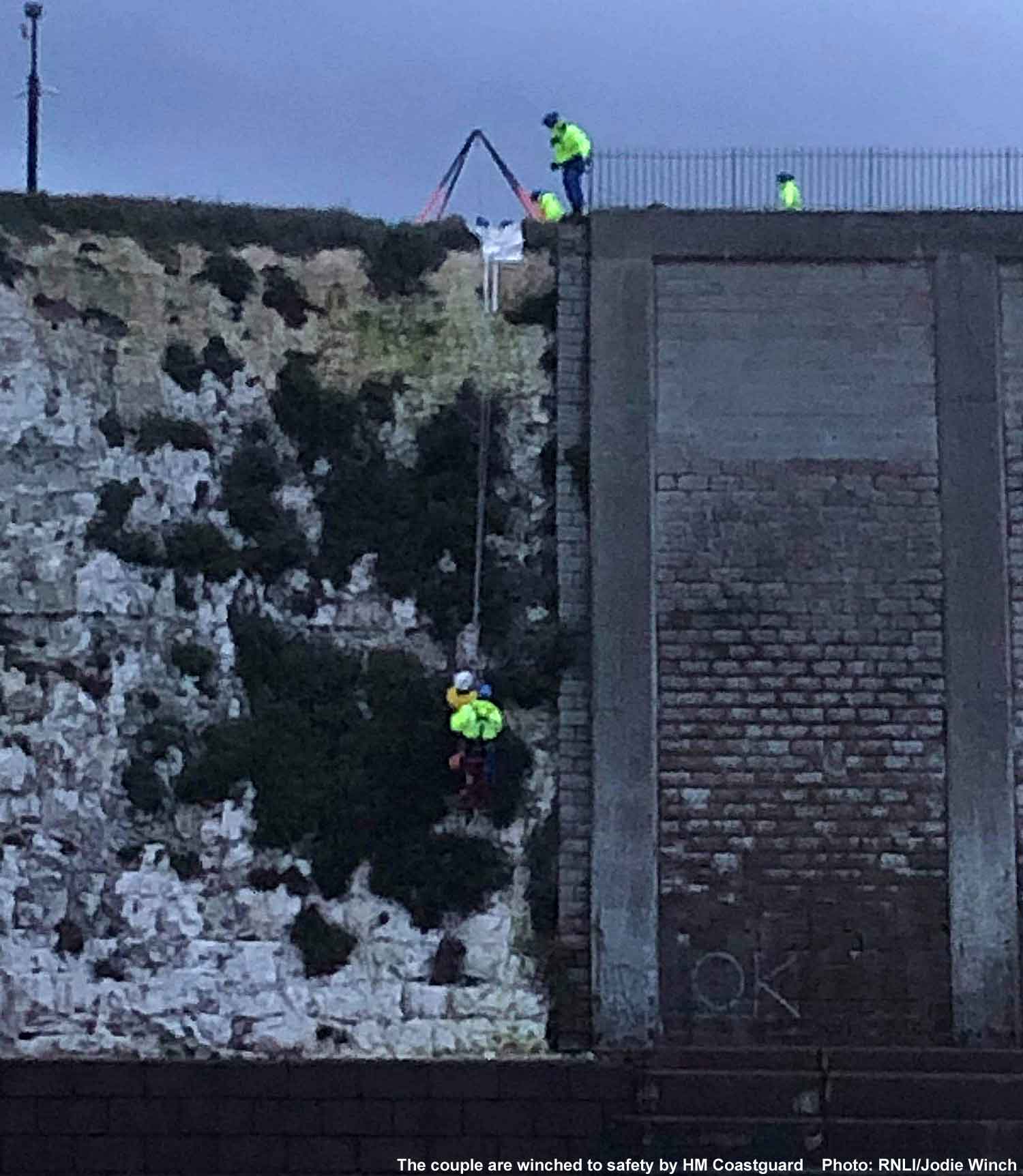 A couple enjoying a beach walk on a sunny but cold day found themselves having to climb up onto a concrete apron to escape the incoming tide.

The couple were visiting the area on Saturday 5 December and had decided to walk along the coast. Not being familiar with the tides they found themselves cut off at the foot of the cliffs below North Foreland and had to climb up onto a man made ledge below the wastewater pumping station.

A passing Estuary Services Ltd Pilot boat, returning to Ramsgate from a routine trip boarding a pilot onto a cargo vessel, was in the area and heard over the radio that two people had been reported stuck on the cliffs.

One of the crew was also a member of HM Coastguard and so he advised the Coastguard of the situation and the crew of Ramsgate RNLI were also called to attend. The pilot boat remained off shore until the lifeboat had arrived.

The inshore lifeboat Claire and David Delves was launched and soon was in the vicinity. The tide had now turned and there was a heavy swell making it difficult to approach the foot of the cliffs.

One of the volunteer crew members went into the water, swam ashore and climbed up onto the platform with the walkers to reassure and comfort them. They had been trapped for over an hour by now and the light was failing. They were cold and anxious, although safe at that time.

It was obvious they would struggle to climb back down into the water to reach the inshore lifeboat as with the tide now dropping the water was becoming too shallow for more than one attempt at rescue that way, and with the swell it would have been dangerous.

So the decision was taken to go up the cliff, and once the Coastguard Cliff Rescue team arrived they were winched to safety, including the lifeboat volunteer who was unable to return to the lifeboat. Once everyone was rescued the lifeboat and the Pilot boat returned to Ramsgate Harbour.

Inshore lifeboat volunteer crew member Simon Ellis said ‘ They were lucky that they managed to climb up without getting wet as it was a cold day and the chances of them suffering from exposure would have been higher. If you are walking around the coast do your research first, check the tides as it’s easy to get cut off and always carry a means of communication with you’.