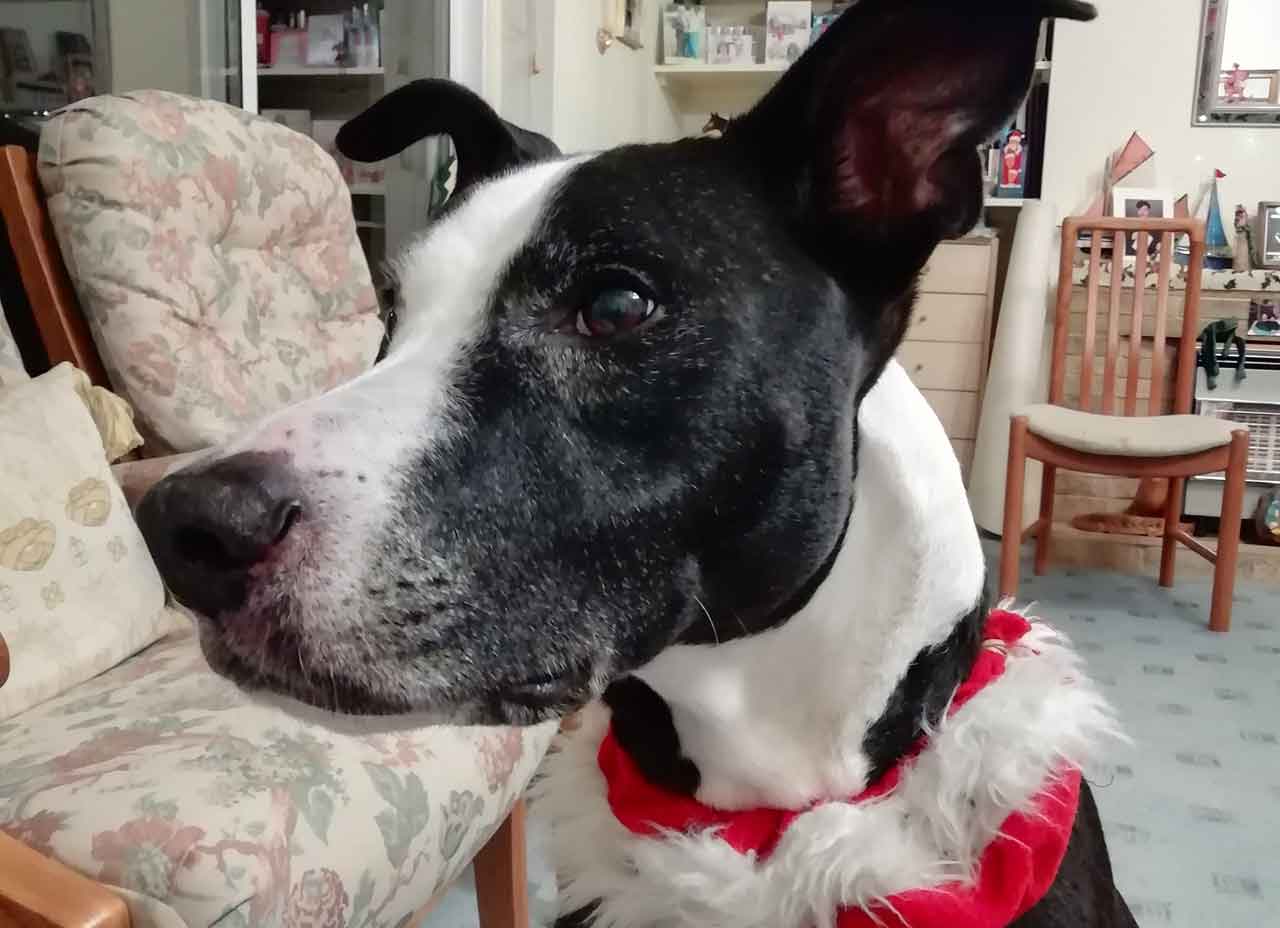 A dappy Great Dane cross named Dexter has been saved by PDSA Vets after he ate three feet of tinsel.

Dexter (10) was taken to vet charity PDSA, which provides free and low cost vet care for pets of people in need, after a long piece of tinsel went missing and he started being sick.

Owner Paul Noakes (56), from Margate, said Dexter has a bit of a history of eating things he shouldn’t. “When he was younger he used to eat sofas and carpets, and two years ago at Christmas he ate tinsel, although we didn’t know straight away. He wasn’t ill at all, and the first we knew was when it started coming out in pieces at both ends!”

Thankfully the tinsel didn’t cause a blockage on that occasion, and since that lucky escape the family have been very careful to keep all decorations high up out of his reach and very secure. But Paul’s son Mitch (15) noticed on Monday evening (14 December) that some tinsel wrapped around ornaments on the mantelpiece was missing. After a thorough search they were pretty certain that Dexter was the culprit, although they had no idea how he’d got the tinsel off without pulling over any of the ornaments.

Paul, who is a full-time carer for his wife, called their local PDSA Pet Clinic and spoke to the out-of-hours service. As Dexter was comfortable and showing no signs of illness they advised to keep a close eye on him overnight, and arranged a phone consultation with PDSA vets the following morning. But that night he was sick, so when PDSA vets rang back in the morning, they advised Paul to bring Dexter straight in. Paul added: “I was a bit worried about how things would be with all the Covid restrictions, but it all felt very safe and well-organised, and the staff were great.”

Kate Milroy, Vet Team Leader at PDSA Margate Pet Clinic, said: “Dexter needed to be taken straight in for emergency surgery, it was clearly causing a blockage and would be fatal if we didn’t remove it as soon as possible. There’s always some risk with any kind of operation, but thanks to Dexter’s owner noticing the early signs of problems we were hopeful it would be straightforward. I was very surprised when I managed to pull the tinsel out all in one piece though!”

Later that day, a very relieved Noakes family were able to collect their beloved dog and take him home. He was very tired after such a major operation, and the family ended up sleeping downstairs with him that night, as they didn’t want him trying to go up the stairs to see them.

Paul said: “Dexter bounced back so quickly, and you can barely even see the scar already. His post-op check was done by PDSA over the phone, and his stitches were dissolvable so we didn’t have to make another journey. It’s a good job they were, as I’ve just tested positive for Covid, so we’re having Christmas in quarantine now! It’s not the Christmas we had planned but we’ll make do, and having Dexter safely home with us is the best present.”

PDSA’s dedicated teams have continued to provide emergency care at the charity’s 48 Pet Hospitals throughout the pandemic. They’ve provided more than half a million remote consultations since March, meaning the vet teams at the Pet Hospitals can focus on providing face-to-face treatment for those pets with the most serious or life-threatening illnesses, while keeping staff and clients safe.

Kate continued: “Pets don’t stop getting ill or injured because there’s a pandemic, or because it’s Christmas. Many PDSA staff will still be working on Christmas and Boxing Day to ensure we can continue to provide emergency care for the UK’s most vulnerable pets throughout the holidays. And due to all the financial uncertainty, our lifeline services are needed now more than ever.”

Please help ensure PDSA can continue to provide vital, life-saving care to pets and owners in need by donating whatever you can this Christmas: www.pdsa.org.uk/donate