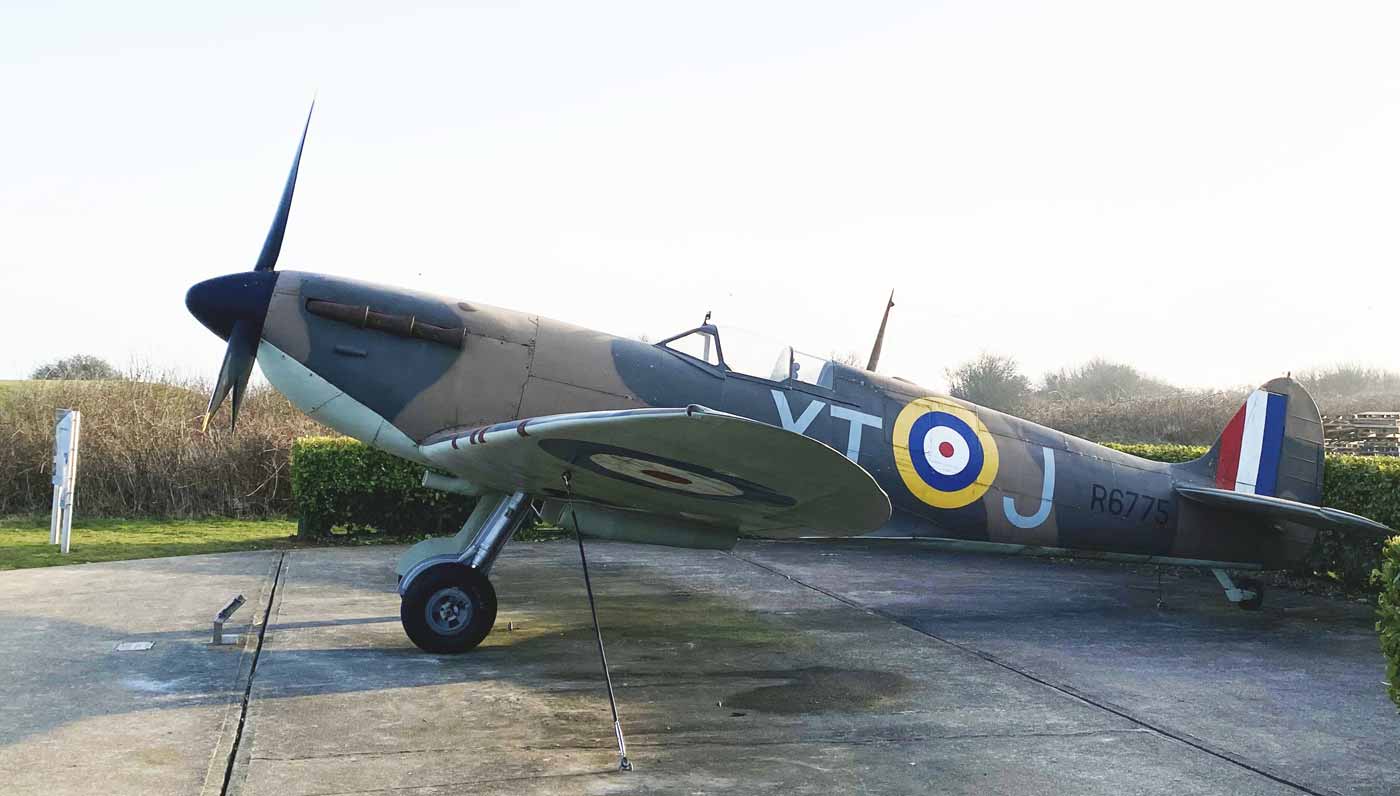 Replica Battle of Britain fighters damaged by winter storms have been repaired free of charge, thanks to generous support from a local business and a conversation many years ago between one of ‘the Few’ and a museum chairman.

Dave Brocklehurst MBE, volunteer at, and chairman of, the Kent Battle of Britain Museum Trust at Hawkinge, came forward to help the nearby Battle of Britain Memorial at Capel-le-Ferne when he heard about the damage to the replica aircraft.

The Hurricane and Spitfire both suffered when the storm ripped through the site, which sits atop Kent’s famous White Cliffs, leaving the Battle of Britain Memorial Trust bracing itself for a repair bill that looked like it could run into many thousands of pounds.

While the Hurricane escaped with a damaged tail wheel, the undercarriage on the Spitfire was badly twisted, with the result that site manager Jules Gomez and Trustee Nick Lawn had to make it safe by supporting the wings with wooden pallets, donated by local timber and builders’ merchant Youngs.

When Dave saw the damage, he decided that with the right specialist help it could be repaired on site, removing the need to transport the aircraft hundreds of miles back to the company that built them.

Although as busy as ever with his own voluntary work at the museum, he was keen to support the Trust, not least because of his friendship with the late Wing Commander Geoffrey Page, DSO, OBE, DFC* who flew in the Battle of Britain and led the campaign to create the National Memorial to the Few, unveiled in 1993.

“Geoffrey was a close friend of mine and once asked me to promise that if the Memorial ever needed help in the future, I would be there – and this seemed like one of those times,” he explained.

“The museum is only a couple of miles up the road and this was a great chance to help out another charity that shares our aim of honouring the memory of Geoffrey and the rest of the Few.”

Dave contacted Eric Cook, a director of local welding company Cook Fabrications, whose daughter Lucy is one of his museum volunteers, and persuaded the company to help repair the damaged undercarriage on both aircraft free of charge.

Eric despatched welder Chris Clifford to the site, where he spent a day working alongside Dave, Jules and museum volunteers Kevan Dunn-Beeching and Rick Kent to fit new, strengthened, supporting plates inside the Spitfire and re-fix the undercarriage.

Trust Chairman Richard Hunting CBE said: “This was a remarkable gesture both by Cook Fabrications and by Dave, whose practical skills and experience allowed him to see what needed doing and who then set things in motion. This has saved us a lot of money at a difficult time, and we are delighted with such generous support.”

A local man, Eric Cook’s mother served in the WAAF at the frontline Battle of Britain RAF station at Hawkinge, part of which is now home to the museum.

He said he had a close affinity with the Trust’s work to remember the Few, adding: “We had the skills and the equipment to be able to help the Trust in its hour of need and I was delighted that we were able to do so.”

The Trust’s Wing visitor centre and car park are currently closed in line with government guidelines, but the external features at the clifftop site, including the Christopher Foxley-Norris Memorial Wall and the National Memorial to the Few are always open to visitors on foot. For more information see www.battleofbritainmemorial.org