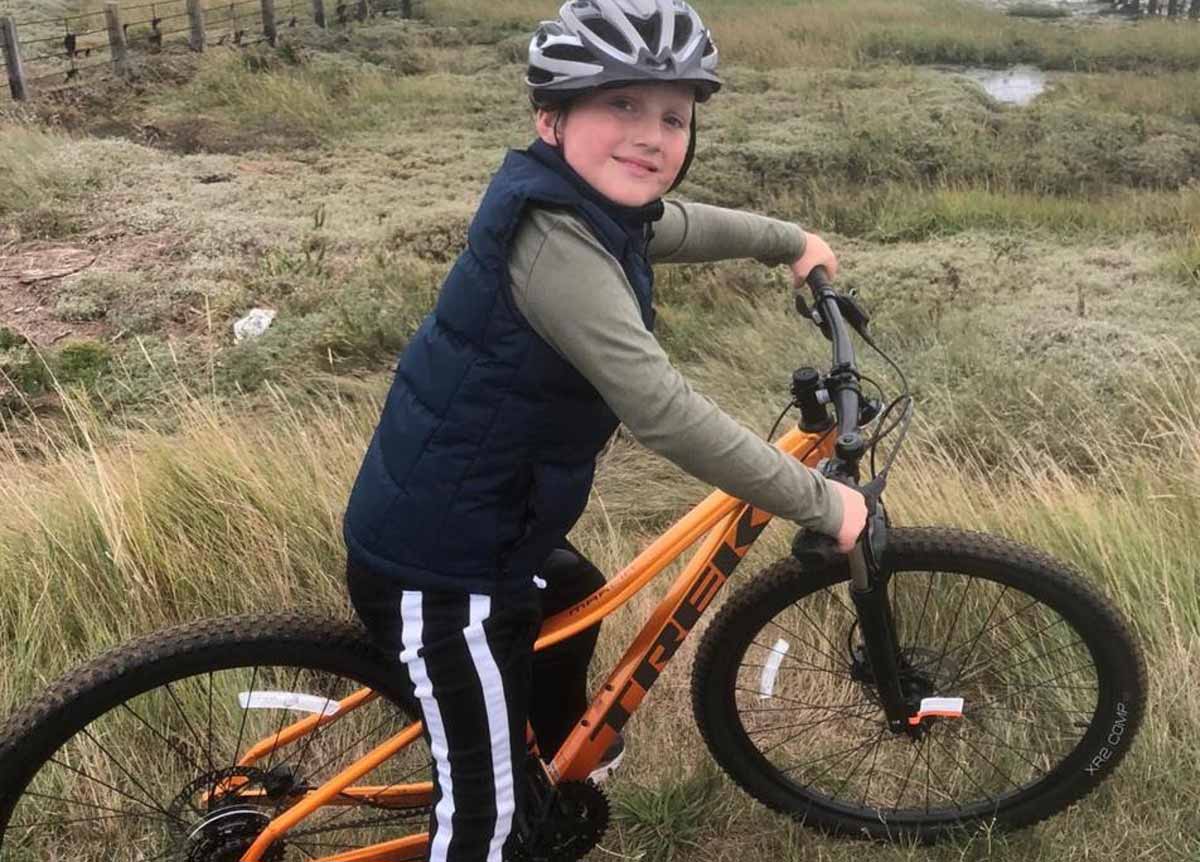 Keen cyclist Frankie Fox, pictured above, is racking up the miles next month by covering 100 miles to support charity Meningitis Now and celebrate his little sister Poppy’s recovery from the disease.

The 8-year-old, from Hoo, in Kent, has been interested in raising money for charity since watching the Celebrity Great British Bake Off, which inspired him.

Mum Emma said: “He instantly said he wanted to raise money for the charity that helped when his sister was ill and we spoke together about challenges he could do and he decided on a big bike ride.”

Frankie is looking to raise £500 towards Meningitis Now’s lifesaving and life-changing work fighting back against meningitis and has worked out he needs to do 3.33 miles a day during May to reach his target.

He said: “I am going to ride my bike 100 miles, it may be hard and sometimes I may not feel like going out after school but I am determined to do it! I will keep a track of my progress on my bike computer and Strava and will keep everyone following my fundraising up to date on my progress. I am really excited and nervous to do this. Thank you for any donations!”

“Frankie really enjoys cycling and we often go for family bike rides,” Emma added. “He hopes to do some bigger rides, so if it’s raining or we have other plans he doesn’t have to go out every day.

“He will ride to his school, The Hundred of Hoo Primary, every day but as that’s only 0.1 miles away he will still have a lot to do after school.

“There are a few local routes he can take around the village and of a weekend we will venture out a bit further. We have a weekend away during May too, so he is excited to explore that area on his bike and have a change of scenery.

“We are so proud of Frankie for wanting to support such an incredible charity. We know he has had a really hard time dealing with everything that Poppy went through and it was really hard for him to understand at the time.

“We know he can do it and we will all be cheering and supporting him through all 100 miles!”

You can support Frankie’s efforts on his fundraising page at https://www.justgiving.com/fundraising/frankiefox2012

“She had been to pre-school that day and came home tired, so we had some cuddles on the sofa,” Emma said. “Then she was sick and I thought she had caught a bug from pre-school. She went to bed about 6:30pm but woke up again about 8pm. Luckily, I put her in our bed and stayed with her upstairs.

“Over the next hour she was really drowsy and kept shaking. I remember ringing 111 to ask for advice. They were asking so many questions and she just seemed to be getting worse, so I put the phone down and called an ambulance. She wasn’t breathing right – I didn’t know what was wrong but we just knew she wasn’t okay. She was saying weird things; I remember she started counting but she was really shouting, and that’s when she was hallucinating.”

“We hadn’t told him how poorly his sister was but he knew that something wasn’t right. He had never been away from us for longer than a night and all of a sudden he had moved into his grandparents, so he was obviously unsettled,” Emma said.

“After nearly three days, we got the really positive news that Poppy was doing well and that they would slowly start reducing the drugs going into her body and get her breathing on her own again. I can’t even put into words how happy, relieved and overwhelmed we felt.

“A week after being home, she was riding her bike and running around and was back to her princess self. Nobody would believe what she had been through just two weeks previously, she recovered so well and so quickly.

“We are so thankful to everyone involved in her care. We rang Meningitis Now when she in hospital and they gave us advice and information. Just speaking to someone outside of the hospital was helpful, it felt like they had more time to explain it. We also found a really helpful informative leaflet on their website.”

“Poppy is also a keen cyclist but cannot do quite as much as Frank due to being younger, but she will be taking part in some of his challenge.”

Jo Wilson, Meningitis Now’s Fundraising Officer, said: “We’re so grateful to Frankie for everything he’s doing to support our work and wish him and the family well with their cycling and fundraising.

“Every mile ridden and every pound raised will make a difference to those who are at risk from meningitis and those whose lives have already been changed forever because of it, as we look to defeat meningitis in the UK within a generation.”

Meningitis Now is working towards a future where no one in the UK loses their life to meningitis and everyone affected gets the support they need.

It does this by funding research into vaccines and prevention, raising awareness so people know what to look for and what action to take if they suspect meningitis and rebuilding futures by providing dedicated support to people living with the impact of the disease.