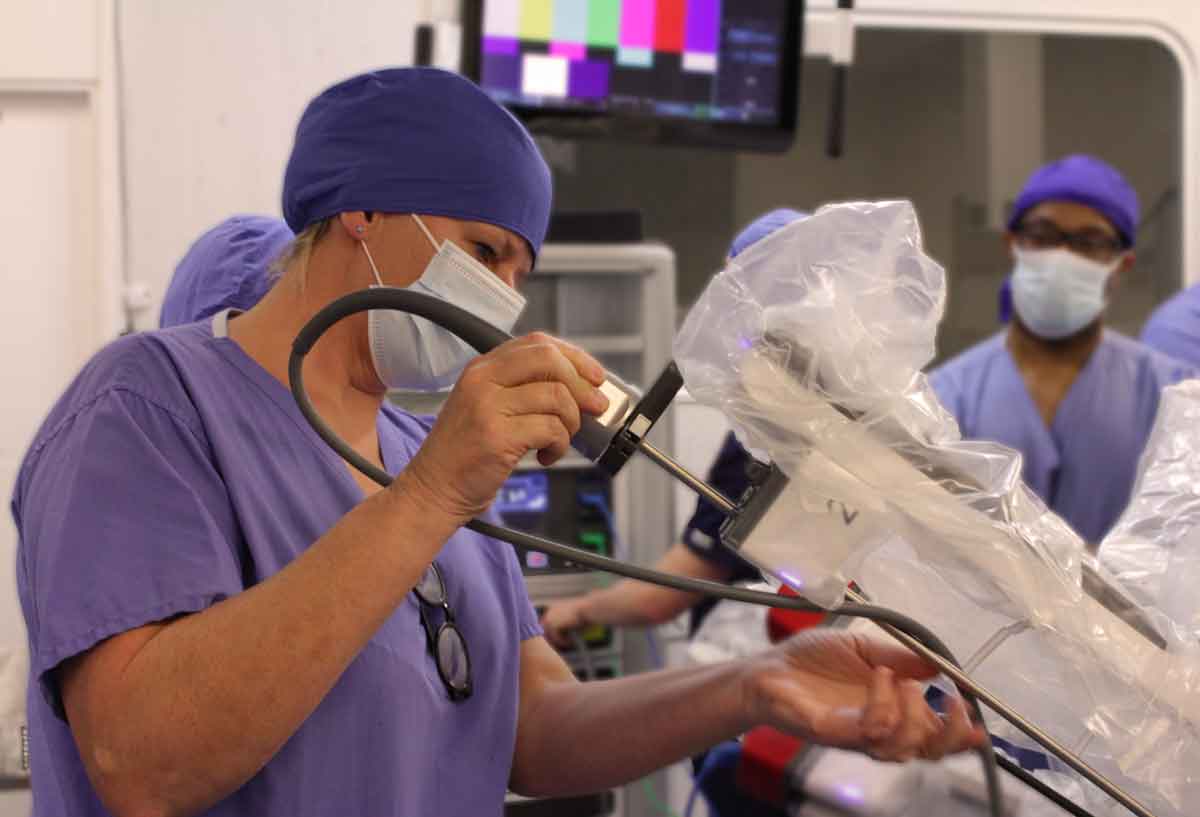 Surgeons at East Kent Hospitals are celebrating a decade of robotic technology – by investing in a new, state-of-the-art, £1.5million robot.

The team at the Kent and Canterbury Hospital bought their first Da Vinci device in March 2011, and used it for the first patient in May that year.

A new, fourth-generation, Da Vinci Xi robot has now been delivered, and the first patient operation took place on Monday.

Consultant Milan Thomas, the Trust’s clinical lead for urology, said: “This is the beginning of a new era for the hospital and our patients, and it will bring many benefits.

“This is the cutting edge in terms of surgical robots available in the world right now, and it is really exciting that it is available to us in east Kent.

“The device is backed by research and development stretching back 30 years that we are now benefitting from.”

The robot can be used to remove tumours on the prostate, kidneys, and bladder, as well as other procedures affecting those organs. Actions such as stitching are a lot quicker using the robot than with traditional keyhole surgery, meaning more time-critical surgery can be performed.

It has four arms, which are connected to the patient via ports; one for a camera that gives the surgeon a 3d image inside the body, and the other three for instruments.

A separate console is operated by the surgeon, with their feet controlling the movement of the camera and hand controls for the instruments.

Mr Thomas said: “The camera on the new robot is smaller, so we can make smaller incisions which means less pain and a faster recovery for patients.

“As there is no natural tremor translated through the robotic instruments, operations can be performed more precisely.”

Recovery from robotic surgery has is significantly quicker compared to traditional procedures. The robotic service at East Kent Hospitals has achieved some of the lowest lengths of stay in the UK following surgery for prostate and kidney surgery. There was also a significant reduction in length of stay for radical cystectomy (removal of bladder for cancer) meaning patients can get home sooner.

Years of training and mentorship are required to acquire the skills to use the robot. The Trust has been recognised as a training centre for robotic surgery by The Urology Foundation and many trainee surgeons have been mentored at EKHUFT on Robotic Fellowships by Ben Eddy, Ed Streeter, Milan Thomas and Sashi Kommu.

Mr Thomas said: “Our Trust was an early adopter of the technology so we have always been ahead of the curve, and we are proud to play a pivotal role in training the surgeons of the future.

“At the moment we have doctors in Australia who should have joined us on a robotic fellowship to learn the techniques but they have been unable to travel because of the pandemic.

“The technology means they can watch procedures live and see and hear what is going on.”