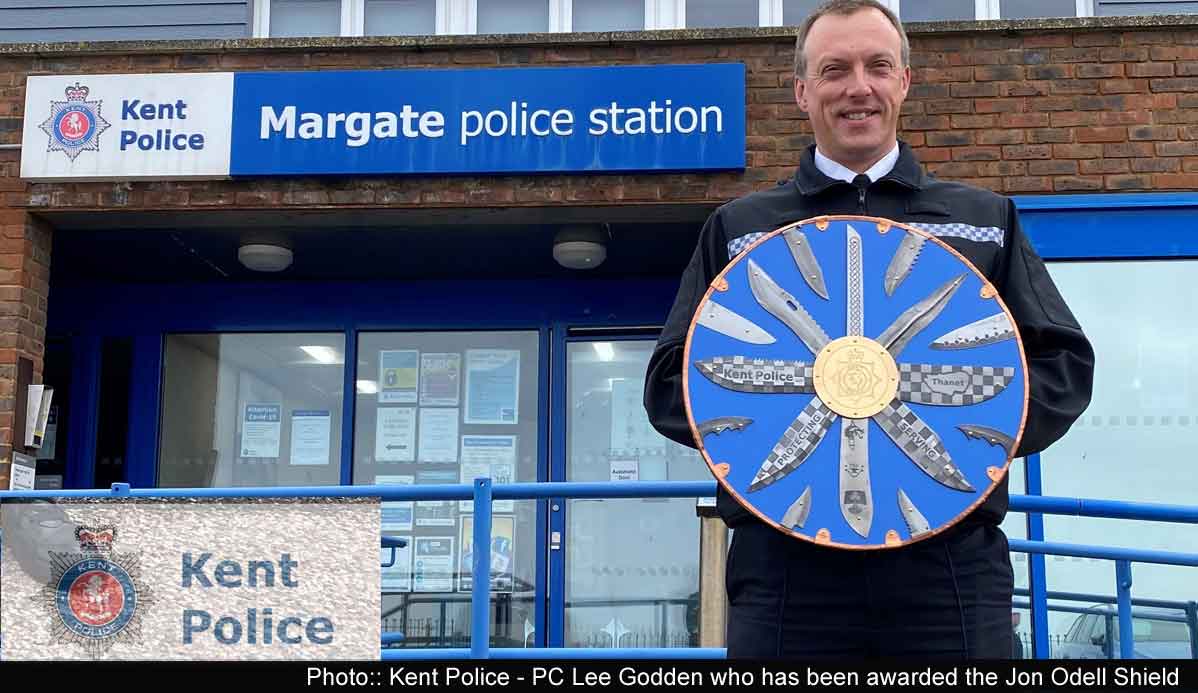 Knives removed from the streets of Thanet have been turned into a commemorative shield as part of a Kent Police initiative to thank its officers for keeping the district safe.

All of the weapons featured on the Jon Odell shield had been seized by Kent Police, through the knife amnesty bins situated around the district.

The shield was made by Broadstairs-based sculptor Gordon Fox, of Fox Forge Art, who uses his blacksmith skills to shape iron, steel, and copper, as well as stone and wood into works of art.

Inspector James Ross contacted Gordon, to see if he was able to make something positive out of the blades. Gordon agreed and drafted up some designs.

Gordon said: ‘The one phrase that kept coming back to me was ‘from offensive to defensive’. Then I had the light bulb moment. What do crime fighters need that protects and serves? A shield – and not just a little one to hang on a wall – but a full sized shield, fit for our warriors of the law. And what better than a round Viking shield, as Thanet has a long Viking heritage.’

Gordon made the knives safe by blunting their edges, before removing their handles, shaping them and arranging them onto a wooden shield.

Inspired by the Viking ship, Hugin, at Pegwell Bay, Gordon etched the ship’s dragon figurehead onto one of the knives, and another knife featured the map of Thanet. Other knives feature the words ‘Protecting’ and ‘Serving’.

The shield was donated to Kent Police by Gordon, and it will be presented annually to officers in Thanet who are recognised by the force for the outstanding work they do. It is named in tribute to Kent Police officer Jon Odell, who was killed while on duty in Margate on 19 December 2000.

The first recipient will be PC Lee Godden, whose skills and tenacity have seen him tutoring new officers as well as achieving a high arrest rate. He was also commended for an incident in which he stopped and searched a woman seen behaving suspiciously, recovered a number of items reported stolen from nearby cars and also found and returned home two teenagers who had been reported missing.

District Commander for Thanet, Chief Inspector Rhiannan Pepper said: ‘The Jon Odell shield is to become a celebration of those officers who go above and beyond to keep people safe in Thanet. I am proud of the proactive work our officers do to detect criminals, identify crime, protect victims and support our communities.

‘These knives have been taken off the streets where they could have caused serious injury, and thanks to Gordon’s extraordinary talent, they have been turned into something positive and symbolic of the good work officers in Thanet do.

‘I’m delighted to be able to present the shield to its first recipient, PC Lee Godden, whose dedication to policing is truly inspirational.’

The shield will be available for the public to see when it will be featured in an art exhibition of Gordon’s work in Margate along with four other artists. The exhibition, Five Go Mad In Margate, will run at the Pie Factory Margate Gallery in Broad Street from 17 to 23 June.