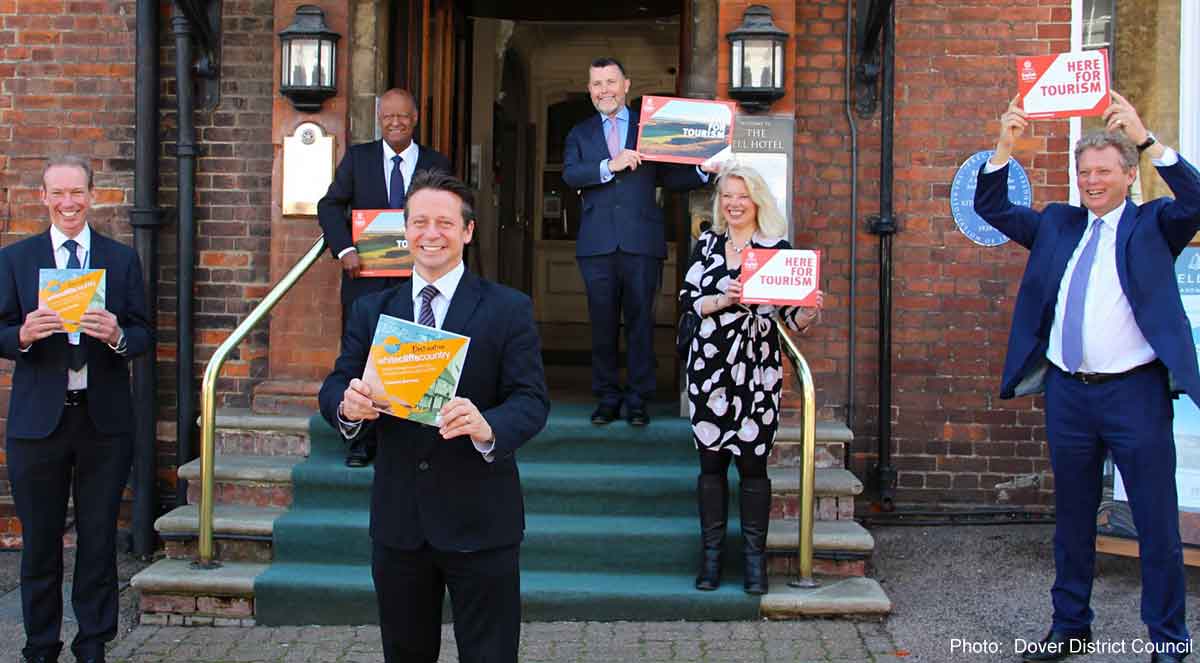 As the district gears up for a bumper summer, June will see the return of The Open to Royal St George’s in Sandwich.

During his visit the Minister visited Royal St George’s Golf Club to meet with The R&A and see the preparations for The 149th Open, golf’s original championship and a major global sporting event.

The Open is normally estimated to bring up to £100m of economic benefit to the local area.  National hotel chain, Travelodge, is seizing the opportunity with a new hotel due to open soon at Discovery Park in Sandwich.

The Minister also visited The Bell Hotel in Sandwich where he was hosted by Jonathan Neame, Chief Executive of Kent-based brewer and pub company Shepherd Neame, and the Leader and Deputy Leader of Dover District Council, to launch the district’s new tourism strategy.

Tourism Minister Nigel Huddleston, said: “There’s so much to do in this wonderful part of the UK and it’s brilliant to see White Cliffs Country ready to welcome back visitors. Kent is a real draw for visitors, and I welcome Dover District Council’s commitment to tourism and attracting new investment. Our tourism industry is a huge driver of the nation’s economy and that is why we’ve already provided over £25 billion in support throughout the pandemic.”

Cllr MJ Holloway, DDC’s Cabinet Member for Tourism and Inward Investment, said: “We were delighted to welcome the Minister to Sandwich and to share our strategy for re-opening and growing the local visitor economy.

“The eyes of the world will be on White Cliffs Country this summer with the return of The Open, and we look forward to harnessing the potential of the event to drive forward further investment and local jobs.”

Jonathan Neame, Chief Executive of Shepherd Neame, said: “It was a pleasure to welcome the Minister to our hotel to celebrate DDC’s new tourism strategy. The challenges of the past year have highlighted the importance of hospitality and local tourism to local economies, jobs and to mental wellbeing, and it was great to hear that the Government is committed to supporting our industry. We are proud to be the official beer supplier for the forthcoming Open Championship, at the start of what we hope will be a Great British summer.”

Tim Checketts, Secretary of the Royal St George’s Golf Club, said: “We were delighted to welcome the Minister for Sport as he saw at first-hand the preparations now well underway to give a warm welcome to the competitors, officials and spectators at The 149th Open.”

Golf tourism is a major contributor to the visitor economy in White Cliffs Country with the district boasting some of the best links golf courses in the world.  Alongside Royal St George’s, The Open has also been hosted by neighbouring Princes Golf Club (1932), and the Royal Cinque Ports Golf Club in Deal (1909, 1920).

Princes Golf Club hosts regional qualifying for The 149th Open in June, and together with the Royal Cinque Ports, The R&A Boys Amateur Championship in August.

Exploring the great outdoors is expected to be one of the most popular activities this summer. Famed worldwide for the iconic White Cliffs of Dover, the district is also home to some of the finest parks and gardens, including Walmer Castle and Gardens, and Goodnestone Park Gardens.

A new free outdoor attraction for 2021 is the restored Grade II Listed Russell Gardens in Dover, designed by the renowned Edwardian architect, Thomas Mawson.  Along with improved visitor facilities, including a new café at neighbouring Kearsney Abbey, the £3.1m restoration has been funded by the National Lottery Heritage Fund.

White Cliffs Country has always provided a warm welcome for international visitors with the shortest crossings from mainland Europe.  Underlining Dover’s prominence as the UK’s busiest passenger port, Summer 2021 sees a host of new investments at the Port of Dover, with new ships, new operators and more services operating from the Kent port.  For bargain hunters, duty-free has also returned to the Channel!

A new operator at the Port this summer is Irish Ferries who join the fray on the premier Dover to Calais route from June 2021.

DFDS meanwhile introduce the longest ever ferry to operate from Dover.  The 214m long Côte D’Opale enters service from Dover to Calais this summer.  DFDS operate a fleet of six ships serving both Calais and Dunkerque.

P&O Ferries return to a five-ship service from Dover to Calais with the return of the Pride of Burgundy.  Construction is now also underway on two new generation double-ended ferries due to enter service with P&O Ferries from Dover in 2023.

Cruising back to business

Cruising is one of the fastest growing sectors of the tourism industry and Dover is the UK’s second busiest cruise port, supporting local suppliers and hospitality businesses.

Carry On Fishing in Dover agreed