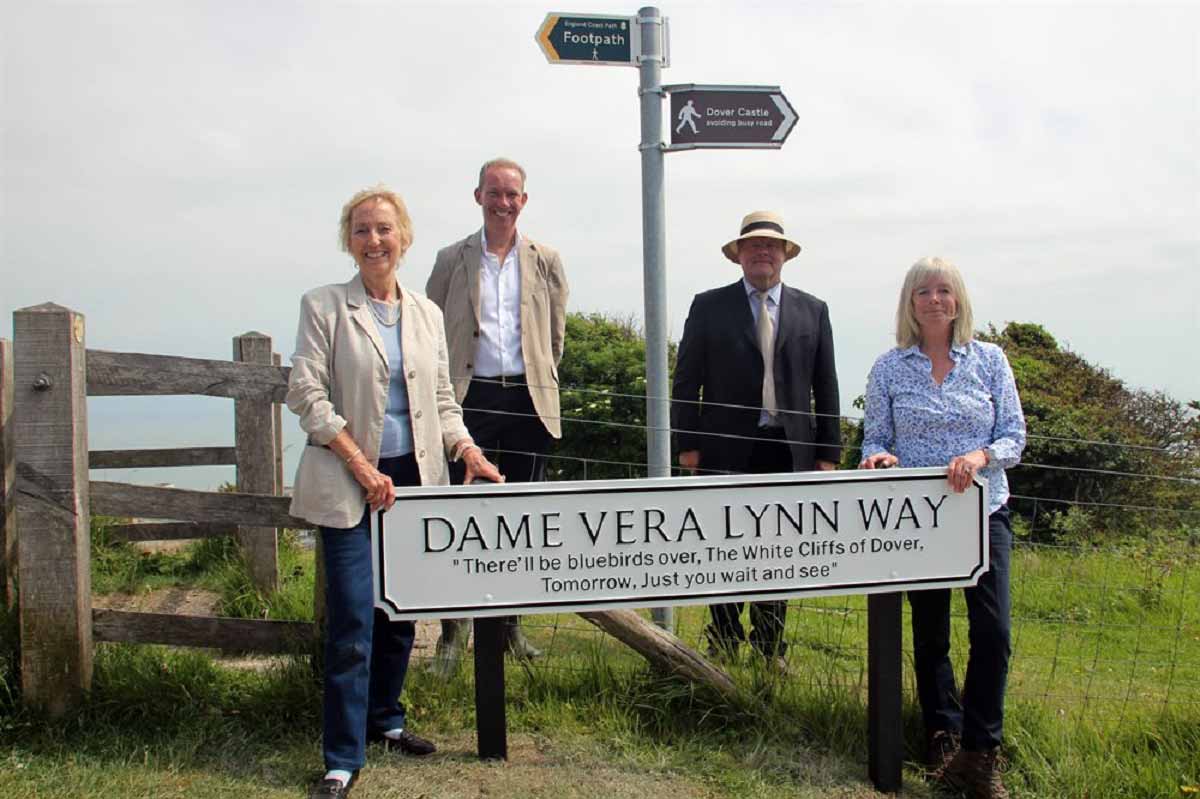 A meadow on the iconic White Cliffs of Dover that was saved for the nation by the National Trust has been renamed in memory of Dame Vera Lynn to mark the anniversary of her death.

The Trust, which bought the land in 2017, unveiled the newly-named ‘Dame Vera Lynn Down’ at a ceremony yesterday to pay tribute to the wartime singer and her enduring connection with the landscape. A footpath leading to the clifftops was also renamed in her honour by Dover District Council.

Long associated with the chalk cliffs, Dame Vera Lynn’s famous songs gave hope to a country at war, with lyrics including ‘there will be bluebirds over the White Cliffs of Dover’ and ‘the valley will bloom again’.

In 2017, she lent her support to a £1million fundraising campaign by the National Trust to buy 178 acres of arable land on the clifftops.

The wheat field, which was part of the purchase, is now being returned to its original grassland state and is already filled with wildflowers, including ox-eye daisy, wild carrot and viper’s bugloss, and attracting corn buntings and skylarks, the nation’s songbird.

Dover District Council meanwhile has renamed the footpath leading from the seafront to the White Cliffs as ‘Dame Vera Lynn Way’ with a new sign featuring the opening line of her famous song, “There’ll be bluebirds over, The White Cliffs of Dover, Tomorrow, Just you wait and see.”

Virginia Lewis-Jones, Dame Vera’s daughter, said: “My mother would be absolutely delighted to have the wildflower meadow named after her, especially as she proactively supported the National Trust’s campaign to protect the landscape back in 2017.  She always loved having flowers around her and was a keen gardener for many decades.

“The re-naming of the footpath to ‘Dame Vera Lynn Way’ is a touching tribute as my mother always remarked the White Cliffs were the last landmark seen as the boys went off to war and the first they saw when they returned home.”

Ginny Portman, General Manager at the National Trust, said: “Dame Vera Lynn will forever be remembered on the White Cliffs of Dover. Her songs are woven into the fabric of the landscape, and we are so grateful for her support in helping us protect it for future generations.

“She is held in great affection in our hearts and we hope that she would be proud to know her name is now memorialised at the White Cliffs, providing lasting memories for those who visit, and a haven for our rare and treasured wildlife. It is fitting that the fields she helped save are now home to the skylark and its beautiful, melodic song.”

Cllr Trevor Bartlett, the Leader of Dover District Council, said: “We’re delighted to be working with the National Trust to remember Dame Vera Lynn with lasting tributes on her beloved White Cliffs of Dover.

“Dame Vera will always have a place in the heart of Dover for both her unstinting work to support our armed forces and veterans community, and also her enduring relationship with preserving the iconic landscape and natural beauty of the White Cliffs of Dover which is so carefully protected and nurtured by the National Trust.”

The Trust and Council further marked the anniversary with a special switching-on of the South Foreland Lighthouse, which has been lit only three times in 33 years.

Built by the Victorians in 1843, the lighthouse was the first to use an electric light and was designed to warn mariners of shifting sands and guide them into the Strait of Dover. It was decommissioned in 1988 but was lit yesterday evening, 17 June, with special permission from the Trinity House Lighthouse Authority and HM Coastguard, in honour of Dame Vera Lynn.

The beam of light was switched on at dusk by her daughter, Virginia Lewis-Jones, and shone over the English Channel throughout the night. It was the first time the Victorian lighthouse has been lit since 2018, when it was reactivated to mark the First World War Centenary.