Two men from the north west of England have been jailed to a total of 30 years and four months after attempting to smuggle 243 kilos of cocaine into the UK on an empty passenger coach.

The National Crime Agency investigated driver Christopher Bullows and his passenger Mark Tucker after the coach was stopped at Dover Docks in September 2020.

A search by Border Force uncovered the cocaine hidden in a specially constructed wastewater tank, shown below. 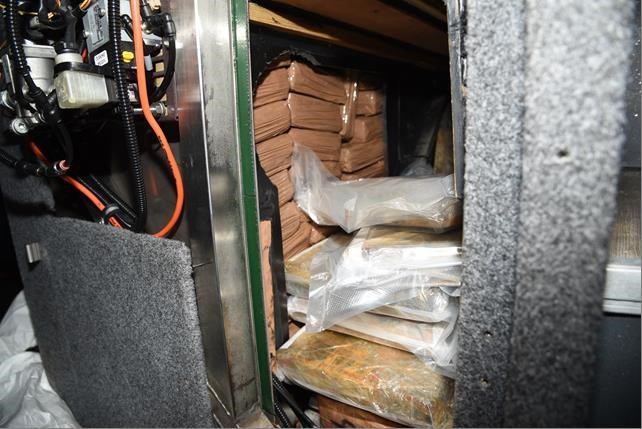 The drugs would have been worth around £19.4 million if sold on the streets of the UK.

Bullows, 50, from St Helens, told NCA investigators that he had taken the coach to Belgium so that the air conditioning system, which was under warranty there, could be repaired. He said that Tucker was a friend and had come along ‘for the jolly’.

Tucker, 54, from Blackburn, said he was a mechanic and had joined Bullows on the trip to check on the repairs.

But further enquiries showed that the air conditioning had been mended in the UK just months before the trip.

Bullows and Tucker were subsequently charged with attempting to import class A drugs. Both initially denied the charge but Bullows changed his plea to guilty at Canterbury Crown Court on 22 April.

Tucker was convicted by a jury on 11 May, following a five-day trial at the same court.

During a hearing today (6 July), Tucker was jailed for 16 years and Bullows for 14 years and four months.

NCA Branch Commander Mark McCormack said: “This was a brazen attempt to smuggle a large amount of cocaine into the UK but it hasn’t ended well for Tucker and Bullows. Not only was their lethal cargo seized, they are now facing long spells in jail.

“Drugs smuggling is behind violence and exploitation in our communities, with vulnerable people often paying the highest price.

“We will continue to work with partners like Border Force to break the supply chains behind this despicable trade, and dismantle the organised crime groups involved.”

Dave Smith, Director of Border Force South East, said: “This is a significant sentence that sends a strong message that we will use every effort of UK law enforcement to disrupt criminal networks and stop drugs entering the UK.

“Working closely with NCA our investigations and intelligence worked to protect the UK borders from drug trafficking and bring those responsible to justice.”

The NCA’s investigation was aided by specialists from the Driver and Vehicle Standards Agency (DVSA), who helped obtain evidence about the coach’s travel patterns from its tachograph.

Marian Kitson, DVSA’s Director of Enforcement, said: “This is a brilliant example of interagency working. I’m incredibly proud of the role my colleagues have played in helping bring this case to a successful conclusion.

“Our usual work is to help protect people from unsafe vehicles and drivers. This work involved keeping people safe in a different way. By sharing our unique knowledge and skills on tachographs, we were able to assist the investigation and bring this drug smuggling to an end.

“This result builds on the good relationships we have with other agencies and can only benefit us all for future investigations.”