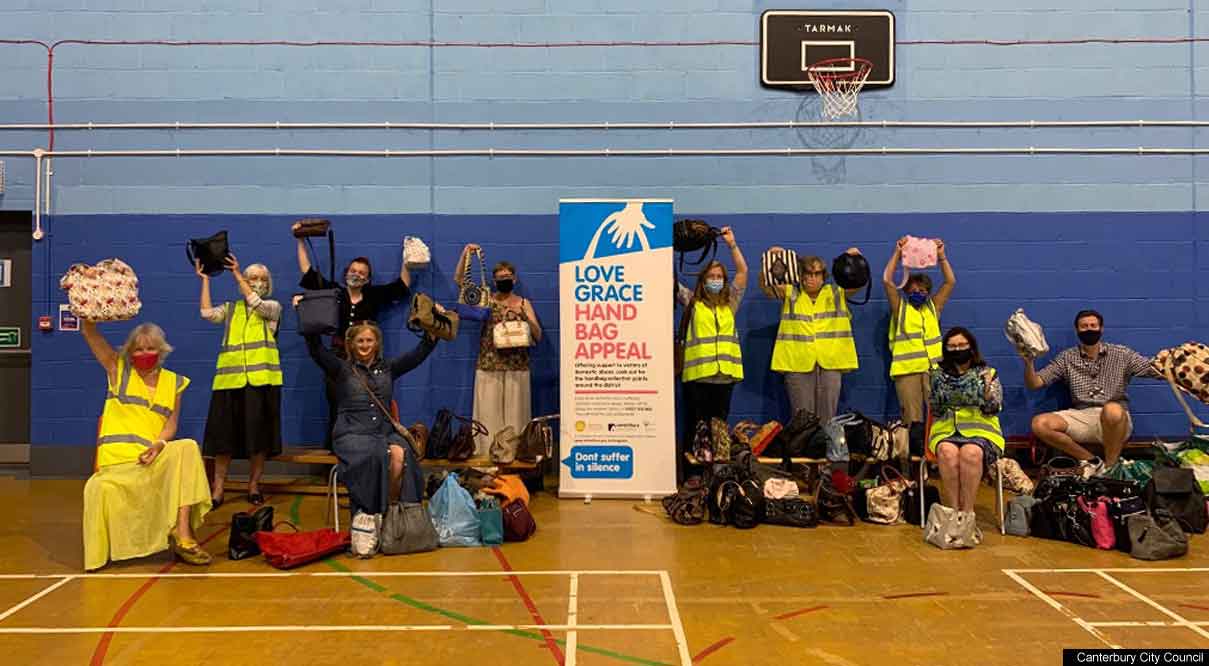 A special appeal in the memory of Grace Millane has seen almost 100 handbags filled with toiletries and donated to women who are suffering from domestic violence and abuse.

Grace lost her life in December 2018 while travelling in New Zealand, and her family has since established the Love Grace Handbag Appeal.

Canterbury City Council staff have been working with the Rising Sun Domestic Violence Abuse Service and the Canterbury Soroptimists to support the appeal by coordinating efforts locally to collect handbags from the community.

Over the last 18 months, bags and toiletries have been donated from all four corners of the district, and earlier this month, 96 bags were packed and sent off.

Alongside the kind donations from residents, £175 of toiletries was donated by Waitrose’s Give a Little Love campaign, and Bag Makers of Kent provided hand made handbags and toiletries bags.

Grace’s mum, Gill Millane, and her aunt, Pauline, travelled to Canterbury from Essex to help sort and pack the bags.

Grace’s cousin, Hannah, and the Millane family, explained more about the appeal and expressed their thanks to everyone who has been involved.

“Thank you so much for everything you and your team at Canterbury City Council have done for the Love Grace Handbag Appeal. It takes a special group of people to get in touch and offer to help support our appeal in Grace’s memory.

“After Grace was unjustly taken from us on the eve of her 22nd birthday while travelling in New Zealand, we decided as a family to raise awareness of domestic violence and violence against women, something we knew very little about until we lost Grace.

“The statistics both in the UK and New Zealand show that there is a huge problem in society and we have been working with The White Ribbon Charity to help educate people at a grassroots level, so that we can draw attention to the problem and work towards stopping it.

“However, we wanted to do something to help the women that had been affected, and after seeing a social media post about filling an unused handbag with toiletries and giving it to a homeless woman, our idea for Love Grace was formed. It helps that Grace loved a handbag.

“We initially wanted to collect enough for 50 bags to donate to our local women’s refuge ‘Changing Pathways’. It helped us come together as a family and focus on creating some positives out of our negative.

“We had no idea how many people would want to get involved and donate to our charitable initiative, and that wonderful people such as Sarah, Emily, Scott and the team from Canterbury City Council would also want to collect and run the appeal on our behalf. We are close to reaching 10,000 bags and we are delighted that some of these can help Rising Sun in supporting women.

“So a huge ‘thank you’ – we know this must have taken a lot of time to plan and collate, as well cleaning and packing the bags, all while working at the council.

“We hope that the women who receive these bags receive some joy from them and realise that they do matter and people do care about them, they deserve more.”

Young people in Folkestone and Hythe given jobs’ boost