Did Folkestone get off lightly after Storm Eunice? 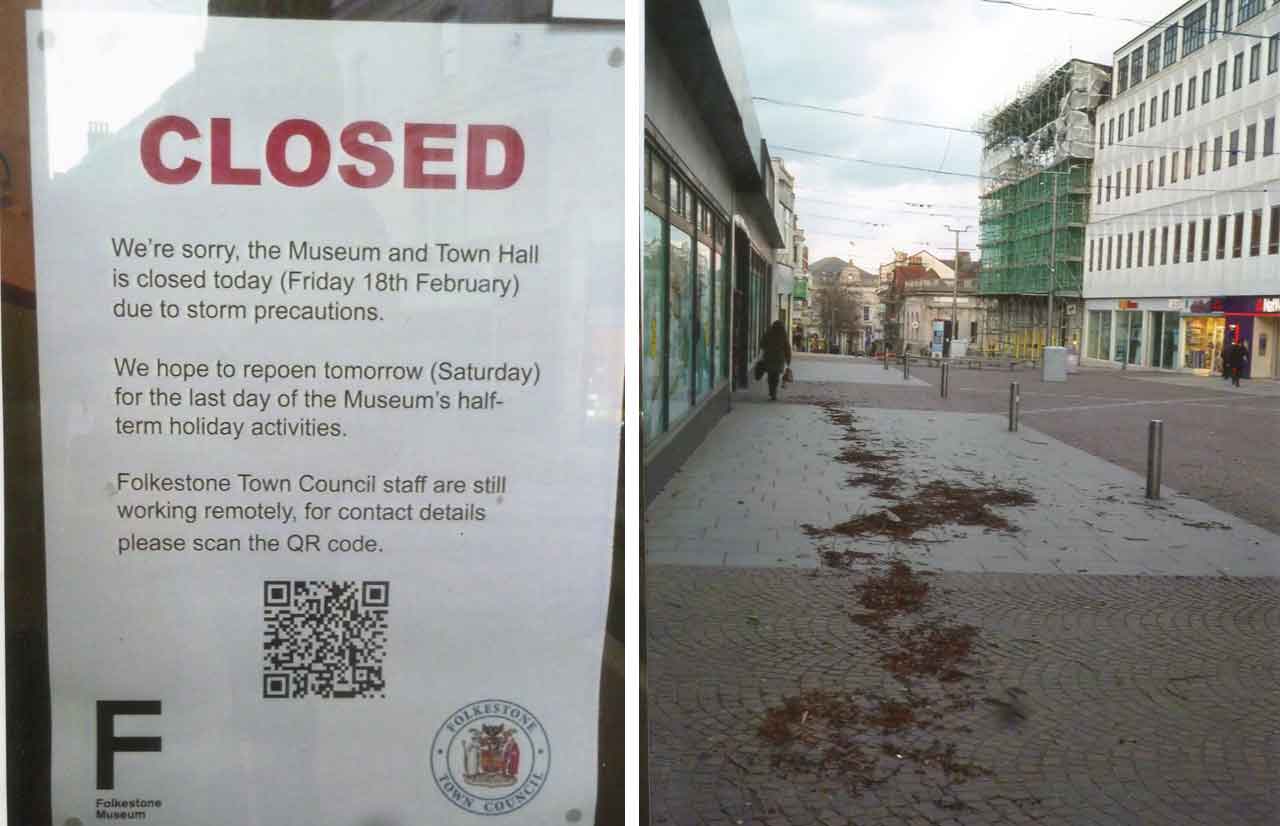 Story and pictures by Ray Duff

Across Folkestone & Hythe District and beyond, Storm Eunice caused widespread disruption and damage throughout Friday but despite a reduction in wind strength overnight the clear up continued to bring difficulties in many areas as more windy weather approached.

On Friday all public transport had to be cancelled, with Bouverie Square packed with buses unable to go anywhere whilst all drivers could do was await the outcome.  On Saturday many bus services had cautiously resumed, but rail lines were subject to further problems as trees were cleared from the lines, ferries subjected to ongoing delays and airports also getting back to normal after flights were shown risking hazardous landings during the storm.

Around Folkestone, the damage was thought to be relatively light, at the time of writing, compared to even nearby Ashford, where County Square shopping centre and the Designer Outlet were damaged or closed

The Multiplex cinema was reported to have been evacuated due to fears about the roof.

There were also reports of damage on Romney Marsh including around New Romney and a lorry overturned on the A2070 between Ashford and Brenzett.

In Shorncliffe Road, Folkestone  a tree was felled closing the road, and indeed trees were seen collapsed in Hawkinge and Denton blocking roads. Funerals at Hawkinge Cemetery were disrupted by celebrants being unable to attend; and the albeit closed former White Lion pub on Cheriton High Street suffered a partly collapsed upper frontage.

Debris from trees and roofs also littered Folkestone alongside other debris which had been blown around including wheelybins rolled away from their usual site.  Most people also stayed at home due the storm, whilst several town centre shops and Folkestone Town hall were closed, though quite a few managed to remain open.

Some venues including Folkestone Library closed early to ensure staff could get home safely.

On Saturday morning, despite some sunshine, the clean up had begun, but  tens of thousands of people across the county also woke up to having no power and had to wait some time as engineers raced to re-connect people.

Meanwhile reports from across the County, and beyond, continued show the devastation and ongoing disruption left in Eunice’s wake, including several tourist venues such as Port Lympne Wildlife Park and Leeds Castle remaining closed.

Asda, in Folkestone Town Centre also closed it’s car park during Saturday afternoon, though the store remained open, due to the ongoing weather.

Indeed, further stormy weather began to arrive on Saturday albeit with some still high winds accompanied this time with rain but hampering the clean ups.  Further high winds etc are expected to continue for a few days yet with people cautioned to take great care.