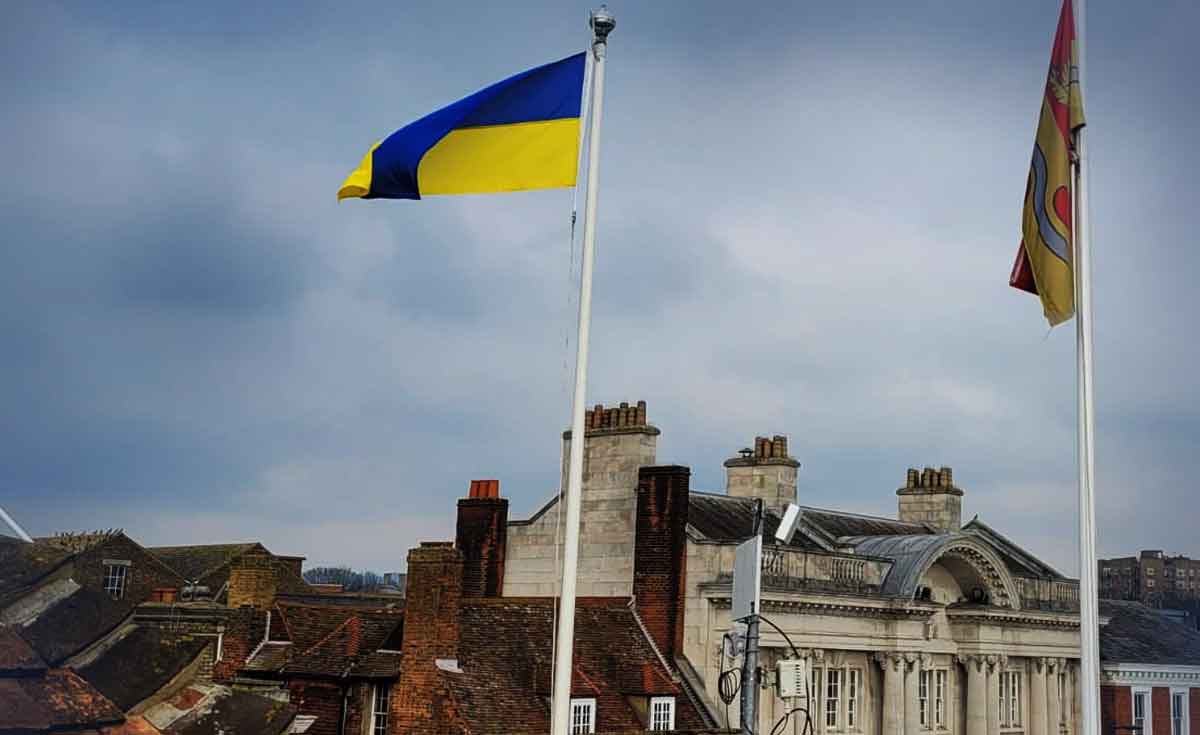 Both Maidstone and Canterbury are pledging support to Ukraine.

Mayor of Maidstone and First Citizen of the Borough, Cllr Fay Gooch has written to the Ukrainian Ambassador to pledge her support to Ukraine.

In her letter Fay has said: “I condemn the actions taken by the Government of Russia by invading the democracy of the free country of Ukraine.

“I am deeply distressed and upset at the unlawful and unprovoked attack on Ukraine that I have witnessed across the media.

“On behalf of all the residents of the Borough of Maidstone, I wish to pledge my full and unswerving support to you, the Government and the people of Ukraine, at this most deeply disturbing of times. Our prayers and our thoughts are with you all.”

Maidstone Town Hall is flying the Ukrainian flag and lighting the building up in blue and yellow as a mark of solidarity for the people of Ukraine.

Canterbury City Council too has pledged to do what it can to support Ukrainians living and working in the district after the brutal Russian invasion of their country.

Leader of Canterbury City Council, Cllr Ben Fitter-Harding, said: “Having watched the images on the television and listened to the harrowing stories and witness testimonies of those directly affected by the war in Ukraine, you cannot fail to be moved by the plight of its people and inspired by their courage.

“We have no doubt Ukrainians living in our district will be desperately worried about the safety of their friends, family and loved ones.

“While Ukrainians focus on the fate of their country and the real human cost of this war, I am proud to say thousands of our residents have been asking what they can do to help despite being 1,500 miles away. I would expect nothing less.

“Our advice to those wanting to help is to make a donation to established charities like the British Red Cross, Oxfam, the Disasters Emergency Committee and UNICEF which have all launched appeals to buy food, water, first aid, medicines, warm clothes or shelter.

“Canterbury and this part of east Kent has a proud and centuries-old tradition of welcoming people from all around the world with open arms and we have given safety and sanctuary to those who were forced to flee murderous regimes in Syria and Afghanistan.

“We are lucky to be able to work with some fantastic, passionate and committed organisations across the voluntary, charitable and public sectors on providing that support.

“With that in mind, this council stands ready once again to do what it can to offer practical support to Ukrainian citizens already here and those that might arrive in the coming weeks and months.

“I have absolutely no doubt the district’s reputation for compassion, caring and an overwhelming desire to help those in desperate need, no questions asked, will shine through once again and I thank everyone for that from the bottom of my heart.”