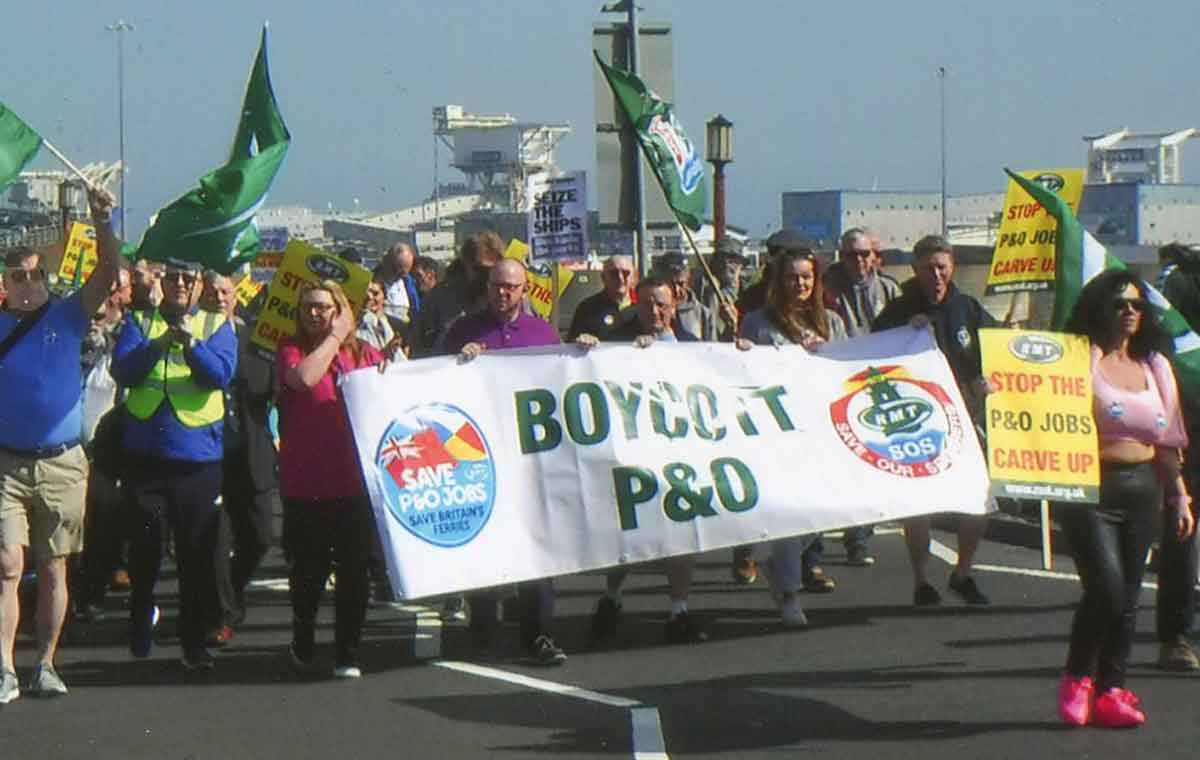 Nearly two hundred people joined another protest in Dover on Saturday, joining those around the UK doing the same, over the recent sudden mass sackings of ferry crews by P&O Ferries.

The protest left the RMT HQ in Snargate Street to again march to the Eastern Docks entrance and back again with many noisy calls to “Sack P&O” alongside “Low Pay- No Way” and “Save Jobs, Save Lives” among those heard and written on the many banners and placards. Once again along the way, many passing vehicles shouted and tooted in support. People in some of the nearby flats along with passers by also gave their support.

The protesters joined thousands in Liverpool attempting to blockade the port, at Southampton outside parent company  DPWorld’s UK headquarters, and at Hull and other ports. All were also demanding that P&O re-instate the crews, sack their entire board including CEO Peter Hebblethwaite who had brazenly admitted that their action was illegal before MP’s just a few days ago and would do so again before attempting to backtrack the next day.

At Dover the leader of the RMT Darren Proctor told the crowd that they are still receiving support from across the UK and from around the World in their fight.  He related how the Cairnryan to Larne ferry had already had to be stopped due to concerns over on-board safety issues by far from perfect training of the agency crews. Indeed he highlighted the huge concerns that all have that the agency crews will simply not have anything like enough experience to run the ferries especially after only a few days training.

He also advised that dockworkers in Rotterdam had refused to let the P&O Ferry leave in solidarity with UK crews and due to safety concerns etc; and then how the UK Unions had met with the P&O board on Thursday but it had only lasted a mere 20 minutes with the company intransigently refusing to back down.

The protest was also joined by the Mayor of Dover, Cllr Gordon Cowen, who first roundly attacked the company for their actions and then related how last Wednesday the entire Dover Town Council had issued a strong condemnation of P&O ‘s action and that they stood with the crews and the wider community who will be badly affected if the sackings are allowed to stand.  They are also working with local businesses and the DWP to help staff affected to potentially obtain new jobs.

The spokesperson of the local GMB Union, which represents local shore staff, also spoke stating that in his Unions view it was the same as they had experienced elsewhere with companies saying they had problems so the got rid of those who had the best pay and conditions to supposedly save the firms.  The P&O action was no different he said.

All continued to demand the Government not only force P&O to re-instate the crews as well as closing the loopholes, but if this failed, the ferries should be taken from the company and run as a new firm.  Others felt that P&O should reflect on the overwhelming condemnation they have received since their ‘illegal’ action, and negotiate in good faith to find a proper resolution in favour of the sacked crews, in order to regain their good name.

There were also calls for the Dover Harbour Board as the owner of the harbour to stand with the people of the town as well as the ferry crews by refusing to allow P&O to operate from the port without the experienced staff back on board.

It is likely that further demonstrations and other actions will continue to take place around the UK.