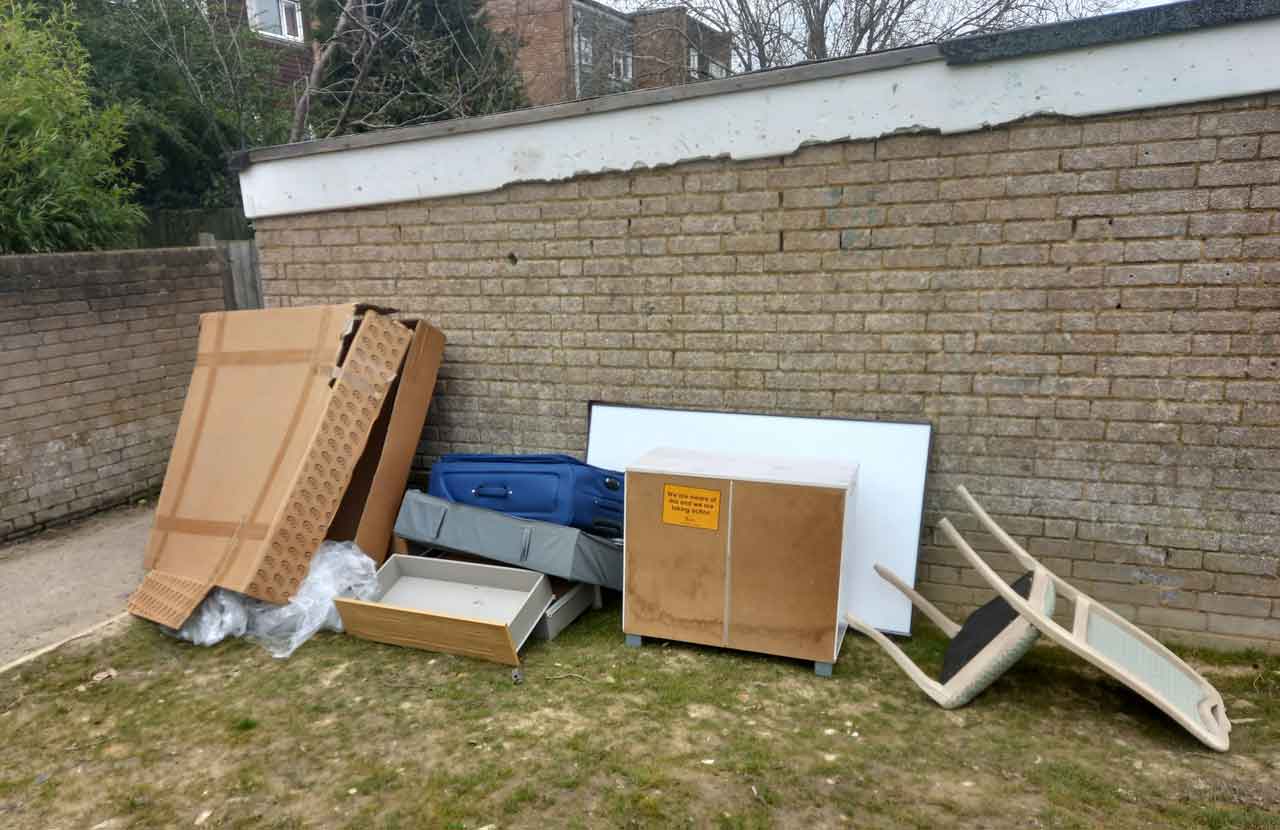 Ashford’s Environmental Enforcement Team has investigated more than 70 suspected cases of fly-tipping since the turn of the year, with three more people hit with Fixed Penalty Notices in recent weeks.

Ashford Borough Council takes the illegal dumping of waste very seriously and will issue fines against offenders and car owners involved in fly-tipping. Householders have a Duty of Care to ensure that they dispose of their household waste correctly. If you have bulk rubbish this can be disposed of at the local Household Waste and Recycling centre or by arranging bulk collection services for a low fee provided by our contractor. If you are caught fly-tipping using a vehicle then the registered keeper is liable and fines will be served.

Following reports from a member of the public of waste found dumped in Kingswood in Challock, investigations led to a resident from Faversham being questioned under caution.

The woman identified the rubbish as hers but failed to provide an explanation on how waste under her control ended up being dumped in woods over 20 miles away. She was charged with failing in her duty of care for her waste and was issued a £400 Fixed Penalty Notice.

She paid the fine within10 days, which resulted in the FPN being reduced to £300.

Youngster caught on CCTV; adult gets the Fixed Penalty Notice

Following reports from Ashford Borough Council employees of waste being dumped near their office, the Environmental Team examined CCTV footage which showed a youngster taking several household items down an alley way and returning empty handed.

These items were under the control of the adult family member, who was also captured and identified on CCTV.

The items were discovered dumped on a private resident’s property. At no time did the householder return and retrieve the items. During an interview under caution the Ashford householder identified the items as hers. She had failed in her duty of care to ensure unwanted waste was disposed of correctly. Following her admission, the householder was served with a £400 Fixed Penalty Notice.

Tip-off from resident leads to action at fly-tipping hotspot

A member of the public told the council about dumped waste near their home on the Brookfield Road estate. This area has been a regular hotspot for fly-tipping. Evidence was retrieved addressed to a nearby resident. The householder was invited to attend an interview under caution, and admitted dumping the items.

They claimed that since other rubbish had previously been dumped there they believed the location was a collection point, which is not the case. The person was subsequently issued with a £400 Fixed Penalty Notice for the offence

Many of the leads that end with offenders being caught come from residents alerting the team to fly-tipping incidents by using the Report It page on the council’s website – see https://www.ashford.gov.uk/environmental-concerns/report-a-street-issue/fly-tipping/

Householders or small businesses found to be using these rogues to dispose of their waste can be prosecuted by Ashford Borough Council, with FPNs of up to £400 per offence. Failure to pay may result in court action. If using a commercial service, you should check whether someone is licensed to carry waste by calling the Environment Agency on 03708 506506 or visit their website at: environment.data.gov.uk/public-register/view/search-waste-carriers-brokers