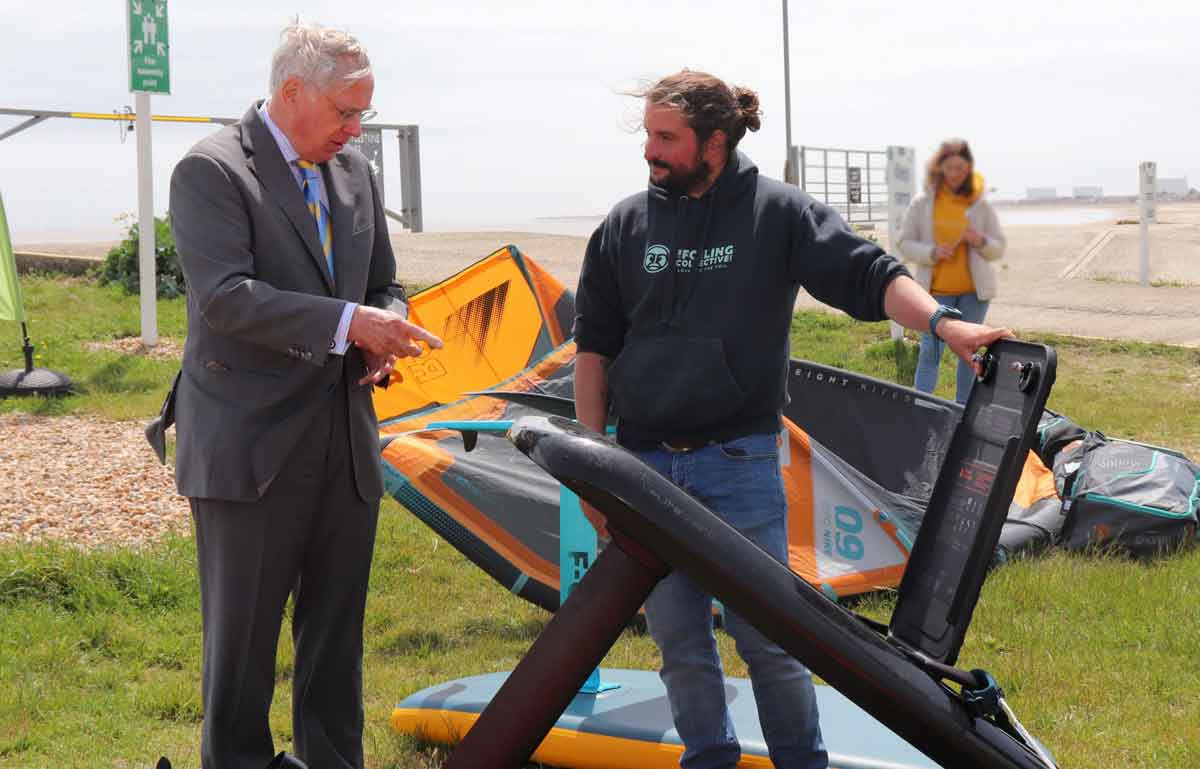 The Duke of Gloucester learns about the water sports equipment from James Ward, of The Foiling Collective, at Greatstone

With a week to go until the Platinum Jubilee celebrations, the Romney Marsh put out the flags yesterday (Thursday) to welcome a royal visitor.

At the community hub, The Duke was greeted by the Lord-Lieutenant of Kent, The Lady Colgrain, and chief executive Jon Wilson, who explained the work of the hub. His Royal Highness chatted with staff, volunteers and patrons, before unveiling a plaque to mark his visit.

At the business hub, The Duke was met by Folkestone & District Council Leader Cllr David Monk and chief executive Susan Priest. Developed in partnership with East Kent Spatial Development Company, the £2 million hub is bringing a range of new business and job opportunities to Romney Marsh and the Duke met some of the first tenants. Before leaving, HRH unveiled a plaque to officially open the centre.

Moving on to Littlestone, His Royal Highness heard about plans to make it a “coastal destination” by creating more than 100 beach chalets, a visitor hub (including accessible toilets, a Changing Places facility and a café concession kiosk) and upgraded car parking, all linked by a fully-accessible boardwalk.

As well as F&HDC officers and representatives from the Romney Marsh Partnership, The Duke met Stefania D’Agorne, of Romney Marsh Countryside Partnership, who briefed him about the national environmental importance of the site and the marsh as a whole. The Duke then enjoyed a water sports demonstration by members of Infinity Sports and The Foiling Collective.

Cllr Monk said: “We were delighted to welcome HRH The Duke of Gloucester to this lovely part of our district. It was an honour to show him around as everyone is getting ready to celebrate the Platinum Jubilee.

“His Royal Highness was genuinely interested in the work we are doing to improve work and leisure opportunities for residents and visitors of the Marsh. With the sun shining, it was certainly looking its best!”

The Duke, who is The Queen’s cousin, also visited RNLI Littlestone lifeboat station and the Varne Boat Club.