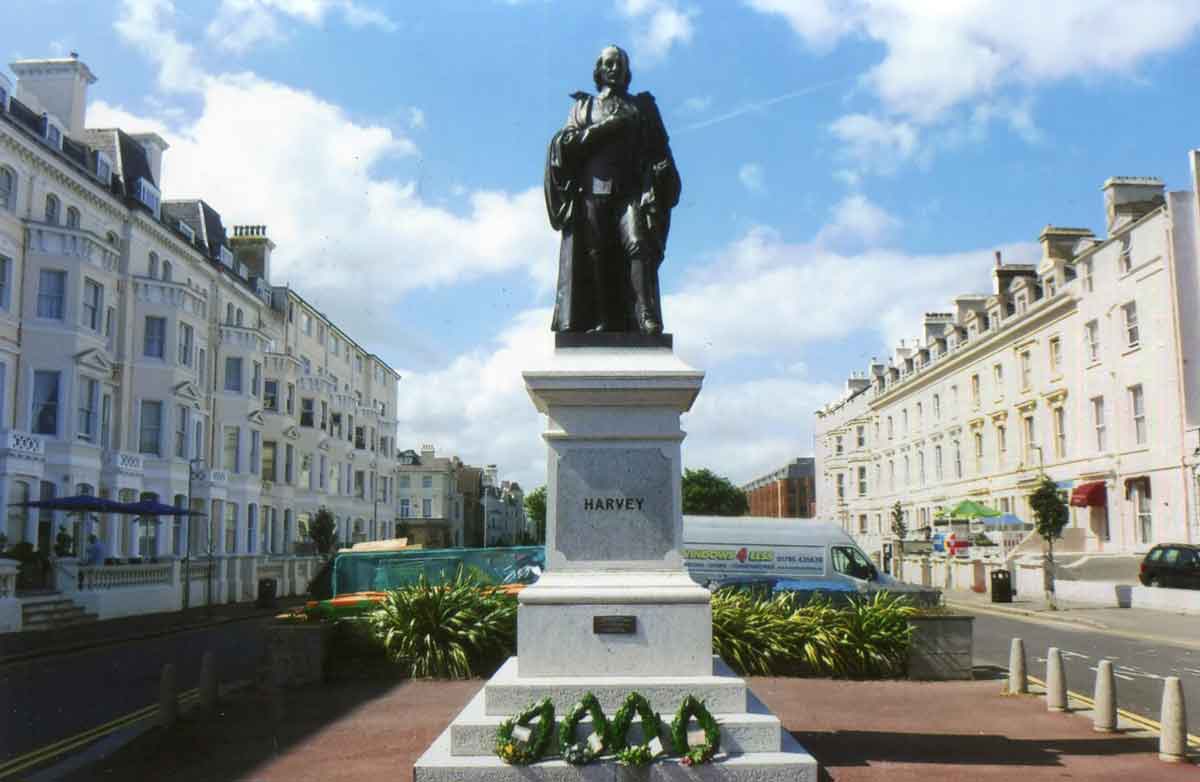 The Harvey Statue with the caplet wreaths placed below Photo: Ray Duff…

Story by Ray Duff – The annual commemoration of Folkestone’s most famous son, Dr William Harvey, was once gain held in full on The Leas beside his statue after a two year break.

The event began with a reception at the Burlington Hotel, attended by the Mayor Cllr Nicola Keen, Deputy Mayor, Cllr Belinda Walker, the Town Clerk Jennifer Childs and many Town Councillors plus Past Mayors. Their guests were once again, from the London institutes who have a direct interest in the work of Harvey.

The official party, fully dressed in ceremonial hats and gowns, then paraded down the Leas past the Bandstand in full music swing during the mid-afternoon, to the Harvey statue at the top of Clifton Gardens near the Leas Cliff Hall.

Here they were joined by some students and a teacher from the Harvey Grammar School, founded in William’s name by his brother Sir Eliab Harvey after the former’s death.

Following a welcome, introduction and prayers, the ‘caplet’ wreaths were then laid by Folkestone Town Mayor, then Dr Robina Coker, President of the Harveian Society and Brigardier (rtd) Ivan Houghton, from the Medical Society of London, and later a fourth caplet was laid by local historian Eamonn Rooney on behalf of Folkestone local historians.

Dr Coker then gave a short speech about the huge importance of William Harvey’s discoveries. How they overturned centuries of beliefs about the heart and circulation of blood although he faced such severe initial opposition to his ideas, that he had to public ‘De Mortu Cordis’ in Frankfurt at the time.  It also took nearly ninety years for his work to be fully accepted.

She related how the institutes still hold many original artefacts from Harvey’s day and have contacts far and wide, including in such as Canada related to his work and legacy. Mention was also made of the Kings school, Canterbury and as mentioned the Harvey Grammar.

The ceremony concluded with further prayers and thanks for the life and work of Harvey before the official party returned to the Burlington.