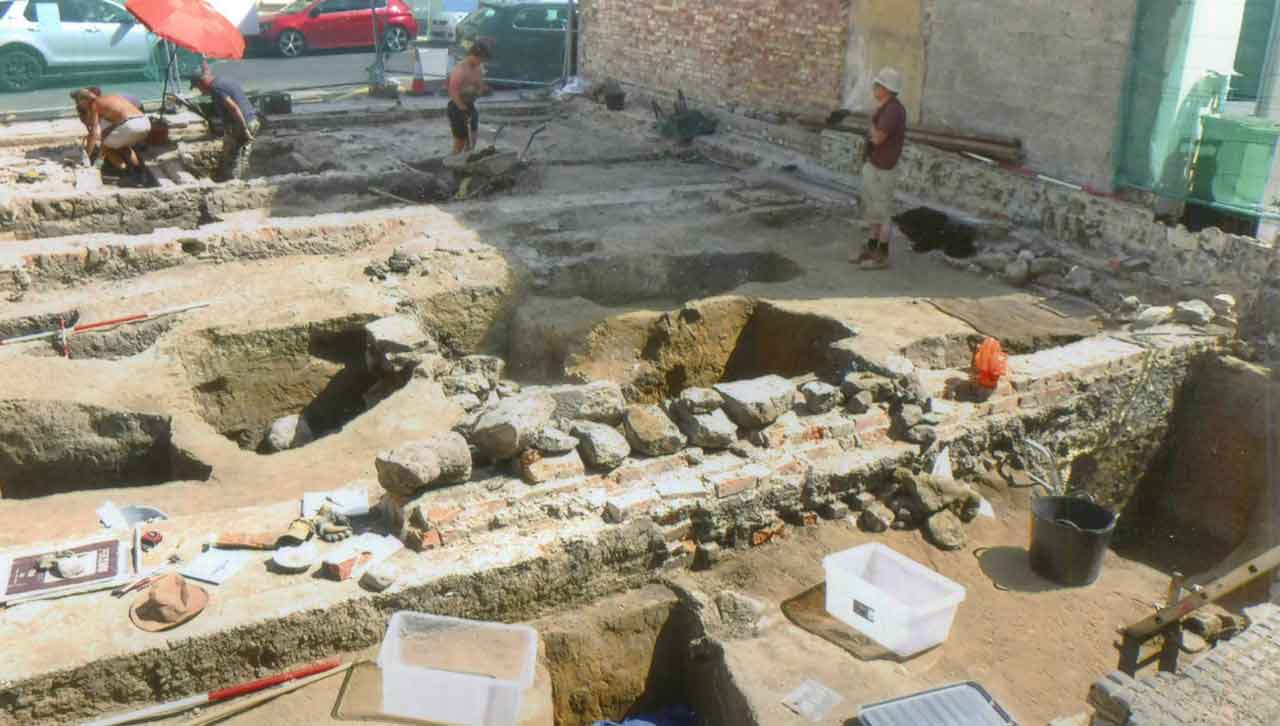 The site being excavated during late June Photo: Ray Duff

Words and pictures by Ray Duff – After the recent demolition of the Dance Easy club in Folkestone’s historic Bayle area, archaeologists led by Dr Tim Allen of Whitstable based Kent Archaeological Projects (KAP), assisted by Folkestone Research and Archaeology Group (FRAG) and local historians including Eamonn Rooney, have revealed highly important finds and information about the site’s religious and social past.

The following is a brief run through of the finds, mainly from a large series of pits which were interspersed between the remaining Dance Easy foundations.

A few pieces of Roman red brick were found, though the dates of these are unknown, plus a few pieces of possible Roman pottery, but these latter to be determined after the dig. Two pieces of flint blade was also found but again date is unknown.  Since no in-situ Roman building was found, it can only be concluded that there was only a ‘Roman presence’ on the Bayle at some point.

Anglo-Saxon period: Four very old cess pits or wells were found and most contained a variety of materials including pottery, bone, burnt daub (used as building material) plus a few corroded metal items and iron slag.  It is likely these are dated to the middle to late Anglo-Saxon era of around the 8th-10thC.   The top sections of the wells had been truncated down by later buildings. Other finds from this period were also found across the site.

Within the centre of the site, some pits containing large greensand stone demolition rubble blocks, which it is thought might have come from a previous Anglo-Saxon Monastery, including two very large ‘dressed or worked stones’ which might have been part of it before being demolished.

All these were beside and below a much later fireplace feature dated to maybe the early 18th century. In addition, some possible Anglo-Norman pottery etc and quite a lot of Victorian pottery had been deposited and mixed within these same pits.

Closer to the Bayle road were found pits with more middle Anglo-Saxon finds including pottery and a fairly rare double pointed, decorated, bone pin-beater needle used in weaving dated to around the late 8thC. This, along with a loom weight also found on the site, and a part of a pair of scales and tweezers may be contemporary with each other. These all might be a slight indication of the last phase of the original Eanswythe Nunnery complex across the Bayle, though this is speculative.

Further items such as pottery and bone, likely from the Anglo-Norman period were found in a number of pits on the site and may be dated to the 12th-14th centuries.

On the east side of the site by the road were the foundations of some 18th-19th Century buildings, although one wall appeared to be medieval in origin, perhaps 13-15th Century, and formed the remains of the old stone fronted ones including the former Green Dragon Inn. Again pottery, bone and some Kent peg tile found of this period; plus some likely Anglo-Saxon pits found underneath with items from that era.

Future of the finds

Overall there were signs of multi-period occupation and usages going back likely over 2000 years.  It should be noted though that the final interpretations, including dating, of all the above lay with the lead archaeologists at KAP and their report which may take some time to produce.

In the meantime, the pottery and other objects, including the dressed stone blocks, will shortly start to be cleaned by FRAG ahead of their being sent off for close examination, dating, and eventual return to Folkestone Museum for future storage and exhibitions.

And finally readers may like to note that a new archaeological excavation on Folkestone’s Roman Villa site on East Cliff is provisionally set to start at the end of August 2022.